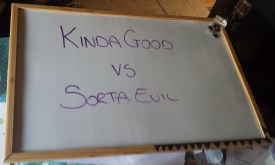 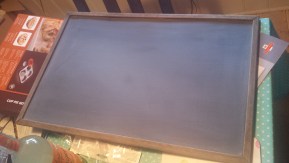 This is not a pin! Repeat, This Is Not A Pin! Well, ok, I used something FROM pinterest, but mostly it was my own plan and it’s perhaps a little more DIY than usual, but I’m doing a whole bunch of that right now.

So, I had this old whiteboard floating about that I attempted to decorate with “Zen Stripes” while I was a teen
(That’s these guys:)

And really it was pretty useless and kinda ugly, sitting there proclaiming it’s cryptic philosophical messages. So I thought about throwing it out and maybe buying a chalkboard, which is far more in keeping with the rest of everything. Then I had a brilliant idea, I’d turn it into a blackboard, preventing waste AND saving myself money. Genius.

However, the afore mentioned decoration caused a bit of an issue. I could just paint over them but I wanted the wood to be seen. White spirit and lots of sanding later, that part of the board is now somewhat thinner but shhhh…

at this point I was pretty bored and decided I was finished, I sanded the whole edge and even a little across the board and wiped the while thing down with white spirit (which didn’t easily remove the dry wipe marker by the way) and moved onto painting on the blackboard paint. I painted around the edge 4 time before painting the centre 4 times too (covering up the lovely message from my brother).

Next I painted the wood with malt vinegar which did nothing…so I explored on pinterest and discovered, to get what I was after I needed STEAL WOOL and vinegar that was not malt (do they not have this in america?) I followed the pin on the left but have since found the one on the right (both link to their original blogs): 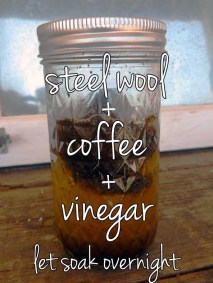 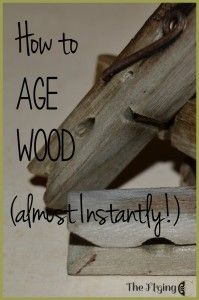 The first is more of a stain and the second explains the ‘science’ behind it all. I soaked my steel wool overnight in my vinegar (and a small bit of tea) and ended up giving the the wood FOUR coats not two, as two left it looking mouldy. I would just like to say at this point, the vinegar mix STINKS! (I used apple cider vinegar) it also stains your hands, so I’d recommend method twos’ pulling apart and soaking the steel wool for a few days then painting it on with a brush. 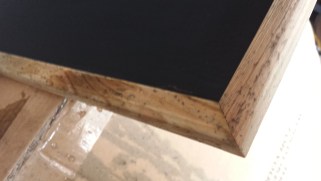 I considered using some wood stain, which I used to change my chest of drawers, to add some colour 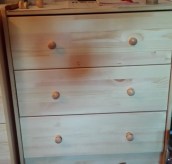 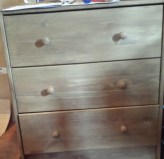 but once it dried from it’s through soaking (the 4th time, I did put a lot of liquid onto the wood) I was quite happy with the colour so, at least for now I’ll leave it like this. I would recommend painting it on very wetly each time! 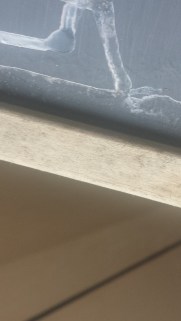 Once it was fully dry I added a last coat of blackboard paint to cover any scratches and to attempt to get it to dry smoother, I used a sponge though I didn’t leave it bloched on, I ended up smoothing with the sponge, but it seems to be smoother than it was. Then I ‘seasoned’ my chalkboard, this is apparently supposed to be done so that what you write on there first isn’t burnt in forever. Then you can start writing on it! 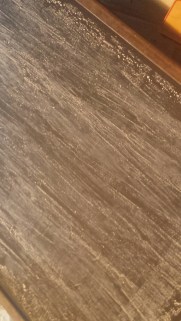 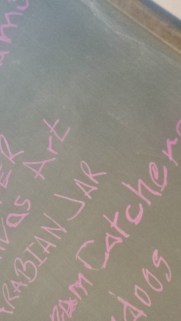 and then it was all done. Though, I think the wood is still getting darker.

While it’s not super pretty, it’s certainly nicer than the whiteboard I had before and I like it!