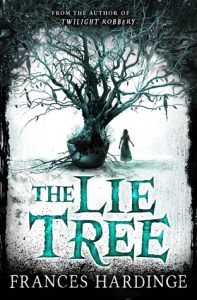 Thank you to Netgalley and the publishers for a chance to read this excerpt in exchange for an honest review.

‘ “All that a daughter can do,” the Reverend said more quietly, “in recompense for the debt she cannot pay, is to hold steadfastly to the path of duty, gratitude and humility.” ‘ Loc 1100

The leaves were cold and slightly clammy. There was no mistaking them. She had seen their likeness painstakingly sketched in her father’s journal. This was his greatest secret, his treasure and his undoing. The Tree of Lies. Now it was hers, and the journey he had never finished stretched out before her.

When Faith’s father is found dead under mysterious circumstances, she is determined to untangle the truth from the lies. Searching through his belongings for clues she discovers a strange tree. A tree that feeds off whispered lies and bears fruit that reveals hidden secrets. The bigger the lie, and the more people who believe it, the bigger the truth that is uncovered.

But as Faith’s untruths spread like wildfire across her small island community, she discovers that sometimes a single lie is more potent than any truth.

This was such an amazingly intricate and spell-binding story. It was so well executed that I found myself on an emotional roller-coaster that I couldn’t get off of!

When Faith’s father is found dead, a few days after arriving on the island of Vane, most people suspect he committed suicide. Determined to prove otherwise, Faith starts to examine the work that her father has been doing. Trying to find the cause of his paranoia. What she finds is a note book about a legendary tree, one that feeds off lies and in return produces a fruit that reveals a secret, a truth linked to the lie itself. Faith must convince those around her, that her father was murdered, but to do so she must first spread some lies, and lies, as we know can have terrible consequences.

Faith was a wonderful character, full of spirit and fierce loyalty. As a girl in the Victorian era she was continuously told off for any bold or brash actions she did. Even when she was being the dutiful and quiet, Reverends daughter she had to put up with a lot of cruel and hurtful things, including horrible things said by her own parents. (I hated her parents) I felt so angry with this and spent a lot of time ranting about the injustice of the inequality during Victorian times, to my partner. But these aspects of society in the 1860′s were wonderfully played, as Faith quickly learned how to twist her situation to her advantage. She may have once thought that being unnoticed and undervalued was a terrible side effect of being a girl but when it came to spreading lies… well no one notices it when it came from a girl, especially when that girl was so delightfully clever. There was an interesting sense of right and wrong throughout, because even when Faith was spreading her lies she had to justify it with herself to make it right. There was a wonderful scene with her little brother where Faith declares herself evil and that the Ghost would kill her for her wickedness. It was perfect and broke my heart. Faith grew up a lot during this book and learned that adults weren’t always as good as they made themselves out to be.

I must admit I didn’t see where this was going till really late on, and that was exciting. It’s so refreshing to read a mystery where I didn’t know who the killer was going to be straight away. I loved all of the little details that made this so easy to believe that it was the Victorian Era such as the jacket that Faith’s little brother had to wear to stop him from using his left hand, (because left handed-ness is obviously only a fad that a child can be trained out of) and all of the etiquette rules that women especially were supposed to adhere too.

The Lie Tree may seem long at 400 pages but, at no point did I find myself getting bored. It had all the classic murder mystery plot points but with a rich and beautiful depth to it that left me happy. It challenged a lot of societal views of the Victorian Era including Gender Equality, and Religious and Evolutionary views. It was a beautiful coming of age story. This is definitely worth a read and I am definitely going to read Frances Hardinge’s other work.

The obscene views of the Victorian era