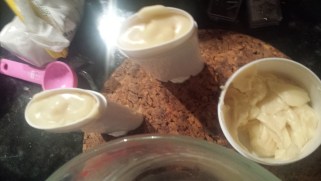 Pin inspired Deodorant number 2!
My quest for the best DIY Deodorant continues with this next enthralling instalment:

This deodorant goes into a stick. Buying empty ones is pretty expensive so I bought cheap deodorant and threw it away. Wasteful perhaps, but I have no guarantee that those I buy will be brand new and totally clean. If it’s impossible to sterilise a used one, how can the new ones be sterile? So, I soaked them in very hot water three times. While this was going on, I made the deodorant.

I had to cut up my bees wax because I have blocks not grains and I wanted it to melt fast. (I even gave myself a blister! Not fun.) I added the powder and whisked it away then I added all the other items I was supposed to. (Though my neem oil was a little solid so I was rushing against the clock and actually had to put it back on the aga while the neem melted. Then I added it all to the tubes and I put it in the fridge overnight.

I had some extra I added to a tub for top ups later, just remelt and add to the top! Because I had small tubes…

Well, I don’t like the neem oil smell, however it’s very good for you apparently, but it sort of grew on me, despite my original assessment of perhaps avoiding it next time, I can stand it now.
There’s no smell, so that’s a bonus. Having to go back to coconut oil from the other one, it wasn’t so fun. There seems to be no residue left over so far which is one up from the last one I tried, but then I’m not currently walking around in a fever haze and it is the season of extra exfoliation. I think I like this one!