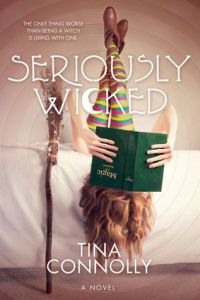 ‘ “Witches are naturally nasty,” she said, “It’s one of our most prized traits, along with that paranoia thing.” ‘ Loc 2317

The hilarious new YA from acclaimed author Tina Connolly.

Camellia’s adopted mother wants Cam to grow up to be just like her. Problem is, Mum’s a seriously wicked witch.

Cam’s used to stopping the witch’s crazy schemes for world domination. But when the witch summons a demon, he gets loose–and into Devon, the cute new boy at school.

Suddenly Cam’s got bigger problems than passing Algebra. Her friends are getting zombiefied. Their dragon is tired of hiding in the RV garage. For being a shy boy-band boy, Devon is sure kissing a bunch of girls. And a phoenix hidden in the school is going to explode on the night of the Halloween Dance.

To stop the demon before he destroys Devon’s soul, Cam might have to try a spell of her own. But if she’s willing to work spells like the witch…will that mean she’s wicked too?

Paein has also reviewed Seriously Wicked. Her review can be found HERE.

There’s an air of quirky oddness about Seriously Wicked. It’s one that I think people are either going to love or hate. Personally, I liked it, but didn’t quite love it.

The story follows Camillia, a teenager on a mission to stop a witch (who happens to be her guardian) from taking over her home town and prevent a demon from corrupting and taking over the body of the cute, new, ‘boy-band-looking’ guy, Devon, who she has a major crush on. Simple right? Wait, throw in Algebra, Spell Lessons and all the house chores (including feeding the werewolf pup, Wulfie, and mucking out the Dragon, yes a dragon…) and life for Camillia is just a little bit complicated.

There was a lot of spells and other magical details that gave a good backdrop to the story, and some of the details were quite funny like the details about Unicorns. The story had a lot of twists and turns that were interesting although sometimes, (especially towards the end) I found it a little hard to follow. The characters themselves didn’t really do it for me. I didn’t feel connected to any of them, and don’t really remember any of them vividly, except for maybe Cam’s best friend Jenah, and that was only because there was quite a lot of details about the way she looked, but not a lot about her as a person. The same could be said about the family dynamics and relationships.

I did enjoy the overall storyline and quite liked that Camillia was trying to be good even though she lived with an ‘evil witch’. If there had been more character development to balance the amount of magical world details then I would have loved this. In the end it was short and sweet but that’s about it. Possibly a little too quirky in the end for me.