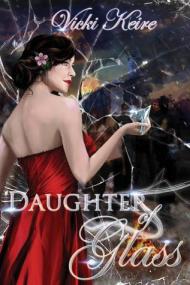 Sasha Alexander has a powerful ability.
Either that, or she’s dangerously mad. She isn’t always sure which.
Her father shrouds her in isolation, convinced he’s protecting her from the same madness that took her mother. But the seven impossible guardians that only she can see insist she’s gifted. Her companions since her mother’s suicide a decade ago, they protect her from hurt, pain and fear.
They also keep her from feeling love.
Sasha doesn’t know how to react when Noah explodes through her defenses. This strange young man with the scarred hands suddenly makes her feel again. And she wants more. More of Noah, of his wakening touch. But the guardians don’t want to lose their decade-long hold, while her father despises Noah on sight.
Sasha risks exposing Noah to a world that would cheerfully see him dead.
But unless she can learn to control her own emotions, the biggest danger to them all may be Sasha herself.

I really liked how the guardians were portrayed and how they were each individual, even if the drawings did startle me. That’s right, this e-book came with pictures!!! But it wasn’t loosely based on Snow White like I’d previously thought, what with the mentions of a motherless girl guarded by 7 beings…

I’ve never seen what she is presented and described like that, I always thought they took as much, if not more than they gave so I found that fascinating too. However I felt that the story was missing something. A lot was focused on the guardians because we needed to be introduced to them all, but at the same time, I felt like they were cropping up in weird places just to fit them in. But my favourite has to be sadness, she has two coloured dresses, pink and blue! can you guess why?

I’d have liked to know more about the town and what happened there as well as more about everyone else in the story. But I’ve just checked out the author and I think that at least a few of her other books are set in this town, so I’ll have to read a few of those to see if they answer my questions, when I’ve worked through some of my other books.

This was quite a short story I felt and it set things up nicely, enticing the reader in.