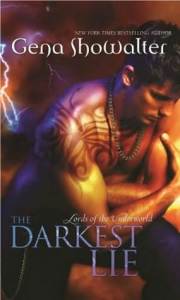 *WARNING* This review contains spoilers to previous books in this series.

This series is definitely my guilty pleasure.

Each book follows a different Lord, each a demon-possessed immortal. The Darkest Lie is Gideon’s story. Gideon is the keeper of the Demon of Lies. I must admit that I was a little apprehensive about this one because as the Keeper of Lies, Gideon is unable to tell the truth without suffering terrible pain, which means he spends the whole time talking in opposites. Something I found terribly annoying in all the other books so when I found out this one was going to focus on him I thought oh god, this is going to be awful! And yes, for the first 40% of The Darkest Lie I was infuriated with ‘Gideon Speak’, but after a while you kinda learn to understand it without the translations.

This book is no different to the other books in this series. Each Immortal has their own problems, own troubled past and broken aspect that needs fixing and can only be fixed by their counterpart. The fixing usually involves sex and lots of fighting till eventually they admit they love each other. In this case Gideon has Scarlet, another immortal, keeper of the demon Nightmares. At the end of the last book we heard the bombshell that Scarlet is Gideon’s wife yet Gideon can not remember her at all! So Gideon is set on finding out what happened to his memory, why can’t he remember this beautiful woman?!

I found Scarlet a little annoying but as you follow them on their journey you come to understand her a bit better and then I didn’t find her as irritating. If this was based on there story alone I probably would have only given this 3 stars. But as with all the other books this had small side stories to build up for the other Lords and these were entertaining.

1. Aeron (ex-keeper of Wraith), Amun (Keeper of Secrets – who I love) and William go to Hell on a rescue mission for Legion. I love the loyalty of these guys, all the immortal warriors are so dedicated to each other they would die for one another. Its just so adorable. And Lysander (the Angel) makes an appearance (yum).

2. Strider (keeper of defeat) goes on the run with the cloak of invisibility and gets attacked by hunters, but manages to give them the slip and turn the tables by capturing one of them, a woman called Haidee/Hadiee.

It was well passed, if a little repetitive in places with some rather stupid and unnecessary arguments but who can complain when the guy is a giver in the bedroom hey

And it was definitely good to find out a bit more of the motive behind why there is a war between the hunters and the Lords. And it just goes to show that Gods are just very manipulative.

Overall not the best of the Lords of the Underworld books but I still love them all and can’t wait for the next one. The Darkest Secret.

Oh yes a book about Amun!