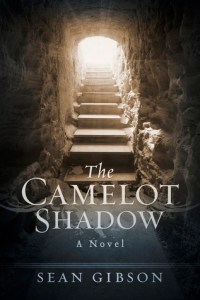 Thank you to YA Buddy Readers’ Corner and Sean Gibson, the Author, for a chance to read this book in exchange for an honest review.

“A chance to save her. Improbably, impossibly, inconceivably.”

Lord Alfred Fitzwilliam spends each day in much the same way: caring for his terminally ill wife and trying to lose himself in the dusty tomes that fill his library. Everything changes when he receives a visit from a man representing a clandestine organization operating with the backing of Queen Victoria herself. The group seeks his aid in finding an Arthurian artifact that, legend holds, can cure its bearer of any wound or disease.

Skeptical but desperate to help his wife, Alfred is convinced that the fabled item might actually exist after witnessing a seemingly impossible display of power by the organization’s leader, James Nigel. He decides to pursue the treasure, accompanied by an eccentric scholar, a deadly druid, and his best friend, a sardonic bookseller who is far more than he seems. As he follows an arcane trail of clues from the gas-lit streets of London to the wilds of Scotland and deep into ancient catacombs in Italy, Alfred becomes enmeshed in a web of hidden agendas, secret societies, and ancient enchantments. Along the way, he learns a dark secret about Nigel’s past—and the true power of the artifact he seeks.

Steeped in a compelling mythology and filled with unexpected twists, The Camelot Shadow will leave readers stunned, breathless, and wrestling with an impossible question: what do you do with an object that has the power to both save the world and destroy it?

I found The Camelot Shadow a little difficult, at first, to get into as the writing style is completely different to all the other books I have read recently. The writing is quite old-fashioned as it is very heavy on descriptions and terminology. The best way to describe it is, it’s like picking up a ‘Classic’. I was worried that I was going to really struggle but I pushed through,, and I am so glad I did because once all the action started to happen and the quest began, I really enjoyed it!

The Camelot Shadow reminds me of a few things, Sherlock Holmes for the period descriptions and mysterious and sometimes totally baffling details that lead to the discoveries, Indiana Jones because of the action, deaths and relic hunting aspect (although the main character is more like Indies Dad than Indiana himself), and also The Da Vinci code for the brilliant application and twisting of well known historical legends, in this case Arthurian lore, to create a new and exciting story! I am a big fan of Arthurian Lore and it was great to see it interpreted in a different way. I liked how certain parts were implied to have been fabricated or changed overtime, as that it made sense and really enhanced the believability of this story.

Alfred was a likeable main character with a kind heart and a trusting nature. He wanted to help his wife and because of that was dragged into this quest and had to face Druids, and Magic, and completely insane men! My favourite character was probably Will. But there were plenty of other characters who really stood out because the character development was amazing. I don’t know how Alfred will ever trust anyone again because I was totally thrown through loops with who could and couldn’t be trusted. Just as I had begun to believe in someone they would show their true colours and someone else would be proven to be good! And come on, what on Earth was I supposed to think when the character was called Trusty John?!!! It screams NOT trustworthy! but then maybe that’s what they want you to think?! I learnt early on not to put too much confidence in any of the shady characters. Even Will and Benjamin came into my firing line of my suspicious mind.

The quest itself was interesting, full of fascinating facts/information. Some people may find this a little heavy going but I found it exciting and intriguing. I loved how they went roaming all over the country and into Europe in the vain hope that the Scabbard actually existed.

This was a thoroughly entertaining, action-packed, mystery novel. And I would recommend it to fans of historical fiction, Conspiracy theories and Action adventures.