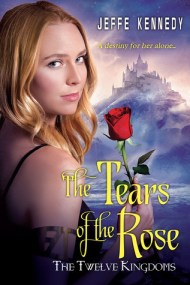 “You make me think. You’ve always done that, from our first conversation. Made me reconsider myself and what I thought was true.”
- Page 324

Three sisters. Motherless daughters of the high king. The eldest is the warrior-woman heir; the middle child is shy and full of witchy intuition; and the youngest, Princess Amelia, she is as beautiful as the sun and just as generous.

Ami met her Prince Charming and went away to his castle on the stormy sea-cliffs—and that should have been her happily ever after. Instead, her husband lies dead and a war rages. Her middle sister has been taken into a demon land, turned into a stranger. The priests and her father are revealing secrets and telling lies. And a power is rising in Ami, too, a power she hardly recognizes, to wield her beauty as a weapon, and her charm as a tool to deceive…
Amelia has never had to be anything but good and sweet and kind and lovely. But the chess game for the Twelve Kingdoms has swept her up in it, and she must make a gambit of her own. Can the prettiest princess become a pawn—or a queen?

Ohhh I like her. I didn’t, but I do now. And him! mmhhmmm. But you can’t leave it there! I NEED to read book 3! Luckily I’m lucky enough to have an e-copy for review, which is what started this whole mess.

So far this is my favourite. I know there’s another, but while Andi went through changes, they were more physical. In this story a spoiled little princess grows up. What’s to hate about that? (except the spoilt bits). She’s just a completely different person. Something happens to make her stop and look at herself and she doesn’t like what she sees. Honestly that must be one of the worst feelings in the world and to be able to use it to grow is a phenomenal show of strength.

This world is fascinating and full of depth. I love the parallel between the princesses and the Goddesses. One for each of them, as to the why of this, well I have an idea, but I don’t actually know yet…

When I first reached the end I thought hthat this was a little of a cliffy, but having throught about it as I type this I’ve realised that perhaps it’s not. Perhaps the next part is just someone elses to tell. I had planned to steam through writing this and get on with the next one, but I’ve slept so little the last few nights that I may just leave it for tomorrow, so that I don’t make it a hat trick.

One sister left! Will that be the end of the series? I’m about to find out.