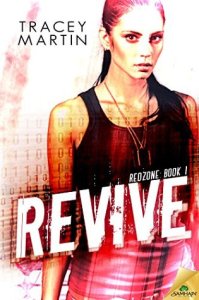 What the mind forgets, the heart remembers.

Alone in a train station bathroom, Sophia Hernandez has no memory of who she is or how she got there. All she’s certain of are three things: her college ID is a lie, bad people are coming for her, and no one can be trusted.

The only clue to her past is the fellow student who finds her. Although Sophia’s gut tells her Kyle is lying when he claims he can’t help her, his touch makes her heart race. Is it because of a red-hot natural attraction, or a missing memory of something far more dangerous?

As two mysterious, menacing men chase them from the station, Sophia’s memories return in frustrating fragments. So do deadly skills she didn’t know she had. In the next forty-eight hours, a loved one’s life will be on the line as she sifts through a mounting tangle of secrets and lies.

Including the most heart-wrenching secret of all. Not only isn’t she a normal college student, she isn’t even a normal human.

Warning: Contains one girl who is more than she seems, one boy who knows more than he’s telling, and enough twists to give you whiplash. Expect explosions of all kinds.

Revive is set in a futuristic world where genetic modifications are possible and there is talk of traveling to Mars and Space Bases. Most of the time the world was very basic and didn’t seem much different from now but every now and then there would be some description that indicated its set at a different time.

I found Revive a little predictable. From the very beginning, when Sophia stumbles out of the bathrooms at a train station unable to remember anything about herself, I kind of had an idea of where the plot was going to go. But that didn’t detract in anyway from me thoroughly enjoying every minute of this book!

I really liked Sophia, she was a strong main character. She had all these instinctive reactions to things and instead of ignoring her gut, like many other irritating heroine’s, she followed it, with some funny and exciting consequences. I liked the way she, like us, knew nothing and had to slowly piece together her whole life in interesting flashbacks. The flashbacks weren’t overused and the past and present were balanced well, because I didn’t find myself getting irritated by the switching back and forth, (like i sometimes do).

The love interests (yes plural I’m afraid) were a little flat in places. I think this was because the story was heavily focused on Sophia, but I can see the point of both Male interests and I can see them both playing a major role in the next book. So fingers crossed we’ll get more in depth details about both of them. I loved the dynamic of her unit and the way they had numbers for names but also secret names that they had chosen for each other. I laughed so much at their nickname for their teacher ‘Bitchpatrick’ because I remember having similar names for our teachers. I’m just glad they were nothing like Fitzpatrick.

I can’t wait to see what will happen in book two. I’m still not completely sure I trust Cole. There’s just something about him that screams brainwashed.

I really enjoyed this as it was quick and fast paced. A great start to a new series. This would be good for anyone that likes CIA stuff or more importantly if they loved the TV series ALIAS, as this is just like that! (Revive reminded me so much of the first few episodes of Season 3!)