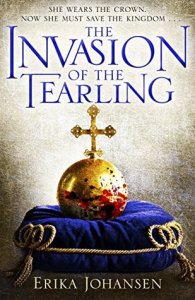 ‘Kelsea had opened the door to chaos, and while she told herself there had been no alternative, her nights were tormented by the certainty that there had been another option, some path that could have stopped the shipment while avoiding the bloodshed to follow, and if Kelsea had only been a bit more clever, she could have found it.” Loc 441

This is my A Book About The Future choice for the 2015 Reading Challenge.

With each passing day, Kelsea Glynn is growing into her new responsibilities as Queen of the Tearling. By stopping the shipments of slaves to the neighbouring kingdom of Mortmesne, she crossed the Red Queen, a brutal ruler whose power derives from dark magic, who is sending her fearsome army into the Tearling to take what is hers. And nothing can stop the invasion.
But as the Mort army draws ever closer, Kelsea develops a mysterious connection to a time before the Crossing, and she finds herself relying on a strange and possibly dangerous ally: a woman named Lily, fighting for her life in a world where being female can feel like a crime. The fate of the Tearling – and that of Kelsea’s own soul – may rest with Lily and her story, but Kelsea may not have enough time to find out.
In this dazzling sequel to her bestselling debut The Queen of the Tearling, Erika Johansen brings back favourite characters, including the Mace and the Red Queen, and introduces unforgettable new players, adding exciting layers to her multidimensional tale of magic, mystery and a fierce young heroine.

It’s been a while since I read the first book in this series, The Queen of the Tearling, but I was surprised by how easily it all came back to me as I started to read The Invasion of the Tearling. With just the mention of a name or a brief mention of an event, all the emotions, all the memories, came flooding back to me and I think this shows great strength in Erika Johansen’s writing ability, because it has obviously really stuck with me.

Like with The Queen of the Tearling, The Invasion of the Tearling shows us events through multiple points of view, from the sweet and simple Jailor, Ewen, to the Red Queen, to the Priest, Tyler. But the main bulk of the story is split between Queen Kelsea as she prepares to fight the approaching Mort Army, and Lily, a seemingly insignificant woman from the Pre-crossing. Lily’s POV is shown to us through visions that Kelsea sees and gives Kelsea and us, a pretty scary view of what Pre-crossing America was like, with society and law in complete meltdown. I really enjoyed this part of the story as it had that creepy familiar feeling you get when its a possible future we could face! I didn’t particularly like Lily at first but she grew on me, and I definitely did not like Greg.

I think people will be surprised with how dark this new installment in the series is. The plot has become full of the nastiness of war. There is mutilations, self-harm, brutal attacks and even rape and Erika Johansen has not shied away from giving these a graphic punch. This book is full of desperation with everyone doing everything they can to survive and keep hold of what little power they have. (Some readers may find that the story can get a little distressing). Even Queen Kelsea herself, has become a rather dark and scary individual. There is a few occasions when you start to see the magic has possibly taken control of her and is twisting her into something sinister. I’m not entirely sure whether I liked her in this book. She seemed a little lead by her urges and didn’t seem to take notice of advice and guidance from those that she probably should be listening too.

There are plenty of other characters that I do like though, I still love the Queen’s guard, All of them. They are all amazing characters, especially Pen and Mace and their devotion to their duty was wonderful. They may not have agreed with Queen Kelsea, or even liked her, most of the time, but they did their job because they are good men. Andelie is growing on me as well as her daughters. Aisa especially, with her feisty attitude, she was like a better version of Kelsea at the beginning of The Queen of the Tearling. But the gem in this book, for me, was Ewen the Jailor, he was just so sweet.

It’s been forever since I’ve found a sequel to be even more amazing than the first book, I literally can not wait for the third book! It’s going to be amazing! In the next book I’d love to find out more about the Fetch and Rowland Finn.  And who is her father??!!! Just more answers to everything please!!!