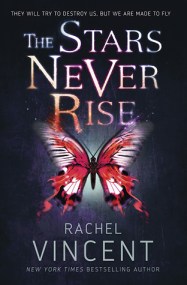 Sixteen-year-old Nina Kane should be worrying about her immortal soul, but she’s too busy trying to actually survive. Her town’s population has been decimated by soul-consuming demons, and souls are in short supply. Watching over her younger sister, Mellie, and scraping together food and money are all that matters. The two of them are a family. They gave up on their deadbeat mom a long time ago.When Nina discovers that Mellie is keeping a secret that threatens their very existence, she’ll do anything to protect her. Because in New Temperance, sins are prosecuted as crimes by the brutal Church and its army of black-robed exorcists. And Mellie’s sin has put her in serious trouble.To keep them both alive, Nina will need to trust Finn, a fugitive with deep green eyes who has already saved her life once and who might just be an exorcist. But what kind of exorcist wears a hoodie?Wanted by the Church and hunted by dark forces, Nina knows she can’t survive on her own. She needs Finn and his group of rogue friends just as much as they need her.

What the fun noodle?! I’ve just been introduced to an epic new series! Obviously, as a book 1 this was mainly an introduction to the characters and the world, which was done rather cleverly and next up we’ll start to get into the bones of the story.

Nina was quite a strong character and actually, surprisingly, so was Mellie. Poor Mellie. Obviously as I was reading this I formed my own opinion about what was going on, what was true and what was not true, so far though, most of it was wrong. Not all of it though and I’m hoping that I’m also right about the souls. I believe it was C. S. Lewis who said “We are not bodies with souls but souls with bodies” and I think that Finn goes some way to possibly proving that. Also, the whole lack of old people is a good cover on their behalf.

I think Finn is my favourite, because he’s meant to be, but also Maddy has to have a certain amount of strength to go through that and I respect that immensely. Can we see more of Maddy please? I also wonder if Finn is going to keep his…friend, cause he’s brought him with him now, he can’t exactly just abandon him. But if he doesn’t what else will he do?

This book vaguely reminds me of a book I read some years ago about “angels” but  I can’t quite remember who it was by. I never continued that series but I sure want to continue this one!