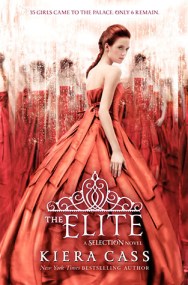 “I was going to fight for him. The other girls wouldn’t know what hit them.”
-page 318

The Selection began with thirty-five girls.
Now with the group narrowed down to the six Elite, the competition to win Prince Maxon’s heart is fiercer than ever—and America is still struggling to decide where her heart truly lies. Is it with Maxon, who could make her life a fairy tale? Or with her first love, Aspen?
America is desperate for more time. But the rest of the Elite know exactly what they want—and America’s chance to choose is about to slip away.

That is not how I was expecting the book to end and I’m not impressed. To be honest, this was pretty much a filler book.

I thought it would end the same way as the first, with her being chosen for the next stage and the next book being about her life at that stage. I was pretty impressed with the pattern and I was looking forward to seeing what happened after, but no.This book was pretty much her being an idiot and see-sawing between her two choices, despite having made up her mind. Several times. Granted, Maxon could have handled things a little better too, but then he perhaps has an excuse for some of it, she really doesn’t. Listen to Johnny Depp girl, he knows what he’s talking about!

It was all going so well too. But that won’t continue into book 3, of course, because there are a few more secrets that need to be brought out sooner rather than later and that item needs to be removed! But it wont be. Because she’s an idiot. Though I am looking forward to her fighting now, and she has that ace up her sleeve she didn’t have before. Because absolutely none of that is cryptic as heck. But I can’t tell you in plain speak exactly what I mean because then I’ll have given away about as much plot as this part of the story seems to have.

Can you tell I’m thoroughly annoyed at this book? Cause I am. I was SO excited with the pattern this series was presenting to me, only to discover that it wasn’t a pattern at all. Grrr. Lets hope book 3 can save the series!

2 comments on “Review: The Elite”