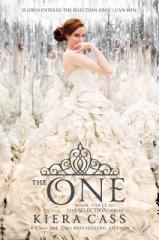 “Whatever it is that you want, America, go after it with all that you have in you.”
-page 245

It’s swoon meets the Hunger Games in the third instalment of THE SELECTION series!
For the four girls who remain at the palace, the friendships they’ve formed, rivalries they’ve struggled with and dangers they’ve faced have bound them to each other for the rest of their lives.
Now, the time has come for one winner to be chosen.
America never dreamed she would find herself anywhere close to the crown – or to Prince Maxon’s heart. But as the competition approaches its end and the threats outside the palace walls grow more vicious, America realises just how much she stands to lose – and how hard she’ll have to fight for the future she wants. The breathtaking third title in THE SELECTION series will make you swoon!

I’m sad to say this book (and series) didn’t live up to my expectations, which I don’t like as I really wanted to like it. It had such potential, but at the end of it all I’m left with so many questions. I know there’s another book but these questions were for this one.

We still barely know about the rebels. I kept expecting for us to find out more. When I finished book 1 I Was so excited, I thought that a the end of #2 she’d become The One, as she’d become part of The Elite at the end of #1, and #3 would be about the wedding and life as the princess and working to save the country from the rebels…no. Of course not! I don’t know that I’m yet to find a series that involves a couple working together. The stories seem to be far more focused on keeping them apart then getting them together at the end.

While not as bad as #2 this still dragged things out and I’m not sure I’m totally happy with the end. I mean, that last secret that turned out to be sort of invalid, the way she didn’t get to explain but then the way she didn’t have to explain…it was just weird. After all the procrastination I certainly got confused.

To put it plainly; this is a love triangle romance story where the characters aren’t honest with each other, are completely indecisive and don’t talk or listen to each other. All the plot points were there for it to be an….I don’t quite know, action romance? But at the end of the day they were left as they were.

I think my favourites where the Italians. I’m not sure I can say I like America much any more. Kriss told her why it was Maxon started to really talk to her and America had a revelation. At one point she was writing a song and I thought that would be it, but no, that disappeared again.

This may seem to be a list of complaints, but I don’t intend it that way, I’m trying to explain how I feel about the book without pointing out exactly what bothered me (because that would be spoilers, sweetie).

I’ve given it three Voodoos because I feel that once I’m over the disappointment of it not being what I hoped it was I will like it better. Plus, it was better than #2!

Book 4 is about their daughter and I’m holding out hope that we get to see much of their life and that she wont stumble into a love triangle too….

2 comments on “Review: The One”