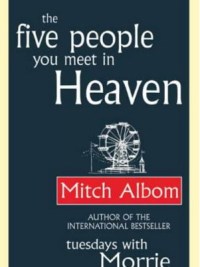 “Strangers are family you haven’t recognised yet.”

Eddie is a war veteran, an old man who has lived an uninspired life. His job is fixing rides at a seaside amusement park. On his 83rd birthday, a tragic accident kills him as he tries to save a little girl from a falling cart. He awakes in the afterlife, where he learns that heaven is not a destination, but an answer.

This is a book that is designed to make you stop and think. Maybe the words are not for you, but what’s more important is the idea behind them. No matter what job you have, what you do in life, you touch people and change lives around you every day.

Everyone stops to wonder at some point why they’re here, what possible impact their existence could ever have in the vast scheme of things and it’s no different for Eddie.
He never got to have the job he dreamed of; instead he ended up working his father’s fixit job on the pier of his childhood, a job he resented. When he is killed, his life is explained to him, by people he sort of remembers, by people he never met and by people he’d give anything to spend another second with. At first, he has more questions, but in the end he finds out exactly how important his life was and comes to understand when it’s your time, it’s your time.