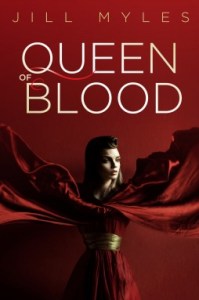 For one hundred years, Seri’s people have lived under the thumb of the Blood, the cruel and mysterious rulers of Athon. Seri wants nothing more than to put food on the table and marry the hotheaded but handsome Rilen come spring. But when a noblewoman asks Seri to be her handmaiden, Rilen insists she move to the enemy’s castle . . . and spy on the newly arrived prince.

After a century, Prince Graeme has grown weary of his family’s curse. The Blood are powerful, but doomed to live in the shadows, flitting from lover to lover, always in search of the mythic Eterna—the one woman who will sate their hunger. Now his father has sent him to the outskirts of the empire to stamp out a rebellious Vidari faction. But when a wild and alluring Vidari girl shows up at court, he finds himself torn between following his father’s orders and following his heart . . .

A war is brewing between Athonite and Vidari, between Blood and man. As uprisings sweep through the land, Seri and Graeme find themselves at the center of a storm with only one choice: betray each other, or betray their people.

This was such a surprise! It was amazing! Such a refreshing and unexpected find. This is one of those books that I hadn’t heard of before (not even by its previous publication name Betrothed) and only requested it on Netgalley because I quite liked the cover. Even the blurb was a little generic, it didn’t scream READ ME, so my expectations weren’t exactly high.

Queen of Blood begins with a fairytale, a short chapter about a myth, a legend, of a man’s greed and how he provoked the wrath of the Goddess after he murdered her followers when he didn’t get his own way. Now he and his son’s will live a cursed life as Blood drinkers, living in the darkness and suffering an unquenchable thirst, that only the Eterna can quench (basically vampires with a chosen soulmate).

The story itself was about Seri, a small village girl who’s people were being down trodden by the Athonites and their Blood drinking rulers. Mistreated and angry her and her people tried to scrap a living. One day the Athonite court appear at the castle and start to cause unrest in her village. Because her and her family need food, Seri ventures into the Athonite market, but she is shunned away, until she meets a noble woman who makes her a proposition. To be her servant for a week.

In my opinion this story is almost two great fairytales combined. At the beginning it is very much a Cinderella story. Especially when she meets the prince and finds she is the Eterna. The second half has a Beauty and the Beast feel to it. She is meant to break the curse and bring peace, but first she must find a way to love Graeme and when you are forced to marry a monster that is not an easy thing to do. Especially when you were supposed to marry someone else, Rilen, a someone else who wishes to wage war against the ‘usurper’ and is willing to use you as bait.

I found Jill Myles writing style very fluid and easy to read. I literally couldn’t put the book down, I just had to read one more chapter… In the end, I finished this within 24 hours, it was that good! I can’t say that this was a completely unique story, or that I didn’t find it predictable but it was well done and I thoroughly enjoyed it.

I found it easy to connect with Seri, as she wanted to please those around her and found herself torn between her new life and her people, I can understand her conflict and it made her a really likeable character in my opinion.

I hated Rilen but i enjoyed the part he played, he was so obviously the Gaston of the piece. As I said earlier the story was a little predictable in places but I thought this made it more enjoyable rather than less, especially in the storyline about Kiane because it gave a really nasty foreboding feeling. The ending felt a little rushed. I wish there had been more fighting in the end because we’d had such a build up to it but they gave up so easily and it all seemed to be over in a few pages. This was the only thing that disappointed me.

I can imagine there are some that will detest the romance that grew between Seri and Prince Graeme mainly because of the instant lust that drew them together after the wedding, but I kind of thought this was understandable as they were paired by a magical aspect it only follows that magic would then try to pull them together. They fell in love slowly though, which was nice, it took time and trust to truly bring them together. There is a couple of sex scenes, nothing too over down, but still hot.

I love this book and I hope others will read it and love it as much as I do. This is a wonderful retelling.