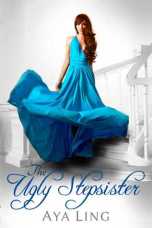 When Kat accidentally rips apart an old picture book, she’s magically transported into the world of Cinderella–as Katriona, one of the ugly stepsisters! Life turns upside down now that she’s a highborn lady and must learn how to survive the social season, including how to get through the door in a huge metal hoop skirt. To get back, she’ll have to complete the story, right to the end of happily ever after. But the odds are huge: the other stepsister is drop-dead gorgeous, the fairy godmother is nowhere to be found, and the prince, despite being insanely hot, openly dislikes balls. Can she ever return to the modern world?

This wasn’t quite the book I expected to be reading, which is good and bad. This was not your average Cinderella tale, in fact I liked that part of it so much, I wish it had just been that, with no our-word travel etc, I’m sure she could have got the ideas elsewhere…especially as it made the ending of the whole thing terribly cruel!!

I found Kats’ ability to cope with her sudden new environment rather refreshing, she got on with it and didn’t spend her time moping about. She got on quite well too and I bet it was her book-worm tendencies. You pick up a thing or two when you read a lot of books…
I’d have liked to have seem more from Henry and Edward, they seemed pretty amazing characters, but I think the book was long enough and we saw them just enough to like them, I think they were my favourite.

I also found the whole book shallow, a lot of preoccupation on peoples looks, which is perhaps more understandable in the ‘Cinderella time’ and I do think that the point about less hours was a little off, they get paid per hour so cutting them doesn’t help and there were a few times when her decisions would have made me put the book down had she seriously gone through with them – thankfully she never did.

I don’t think I was meant to find the ending sad at all, but being a fan of Happily Ever Afters and One True Pairs I really did. Still, it’s a refreshing take on the story of Cinderella!