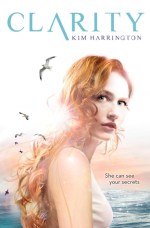 “You don’t have your licence yet.”
“But I can drive with my learners permit as long as an adult is in the car. Hi Mrs Fern.” – page 171

Don’t close your eyes. Except when the truth is too dark to bear.
Clarity “Clare” Fern sees things. Things no one else can see. Things like stolen kisses and long-buried secrets. All she has to do is touch a certain object, and the visions come to her. It’s a gift.
And a curse.
When a teenage girl is found murdered, Clare’s ex-boyfriend wants her to help solve the case — but Clare is still furious at the cheating jerk. Then Clare’s brother — who has supernatural gifts of his own — becomes the prime suspect, and Clare can no longer look away. Teaming up with Gabriel, the smoldering son of the new detective, Clare must venture into the depths of fear, revenge, and lust in order to track the killer. But will her sight fail her just when she needs it most?

Ah! One of my Read It OR Lose It titles! This wasn’t one of the top ones I want to read, mainly it was chosen because it was short and having dropped a book as not-for-me I thought I needed to fill the review space with something and quick! However, I was wrong.

This was a nice little murder mystery – that sounds like an oxymoron – and the murderer wasn’t as obvious as I expected it to be at all! I made my assumptions and got on with the story only to be utterly surprised! You know what they say about assuming…

There was a semi love triangle which seems to unfortunately be key to the plot for the second book so at this point I’ll be saying no thank you, though I may change my mind at a later date, if this storyline ambushes me some time in the future.

I love how the billing of their names goes like so:
Clare (Clarity) Fern
Perry (Periwinkle) Fern
Starla (Mary) Fern
The hippie children ‘mainstreaming’ their name and their mother, hippie-ing hers, which is pretty much irrelevant, but it amused me.

I would love to know more about their father and that colony type place their parents grew up in too! Perhaps he’ll crop up in book 2, though I sort of hope not.

This is perhaps more of a teen/YA book than a full YA. Cute, light and short.