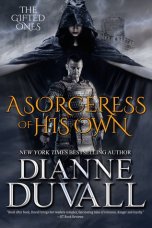 ”Men throughout the continent quailed at the mere sight of his scowl and this little bit of a woman claimed his temper was endearing?” – 78%

Title: A Sorceress of His Own
Author: Dianne Duvall
Published by:
Book: 1 of The Gifted Ones
Genre: Fantasy / Adult
Found: pre-order
Rating: 5 Voodoos

From the New York Times bestselling author of the acclaimed Immortal Guardians series comes an enchanting new series full of romance, danger, and loyalty: The Gifted Ones
Since the day Lord Dillon earned his spurs, rumours of his savagery on the battlefield have preceded him into every room, stilling tongues and sparking fear. Weary of battle, he wishes only to find a woman he can wed who will approach him not with fear, but with the tenderness that has been absent from his life for so long. Yet only the wisewoman seems invariably at ease in his presence. Perhaps because she garners the same fear in others that he does himself.
For seven years, Alyssa has been by Lord Dillon’s side, counselling him from the shadows, healing him with her hands, and staving off the worst of his loneliness while his fearsome reputation keeps others at bay. Blessed–or cursed–with gifts that label her a sorceress, she is forced to conceal her youth and the love she harbours for him beneath umbral robes that lead Dillon and his people to believe she is the same aged wisewoman who served his father.
All is revealed, however, and passions flare when an enemy threatens Dillon’s life and Alyssa sacrifices everything to save him. When Dillon discovers that the wisewoman is far from elderly, he is instantly entranced. And, as he and Alyssa work together to defeat an enemy bent on destroying them both, Dillon will risk anything–even the wrath of his king–to be with her.

I started this one because I was stuck on the side of the road with a nice hole in my tyre and my choices were limited. (but also because I really wanted to read it and that was THE perfect excuse to jump ahead with the reading plan.)
I really enjoyed this book. However, I discovered that some of the background characters are from her other series were in it!! Which is terrible, now I need to read that whole series. No fair Dianne.

I found the writing style really fascinating, it was old-y world-y word-y and I really had to think about the ages! I thought it was well paced, though when ‘separation’ two came I did wonder at the draw out factor, but despite it feeling that way it was actually a pretty big part of the plot. While I was impatient to get on with the plot, I do wish they had more of the ‘before’ relationship though because that’s when all the feelings started to change. Respect, realisations etc.

I found the premise really interesting – which is obviously why I read it in the first place, but I also liked how it was executed. While reading it there were a few things I read that I thought critics would pull apart, but I don’t remember what they are because, instead of noting them, I was preoccupied with actually reading, because that was what I was there for…

I liked both Dillon and Alyssa but I also liked Robert, I’m looking forward to his story in book 2. I would also like to say at this point that if you haven’t read the other series, that’s fine for this book but the second apparently involves a time traveler and I think the first series is set more contemporally than this is so there may be more of a cross over later.

I cant wait to find out more about the gifted ones, either in this series or the previous…because I may have bought book 1….