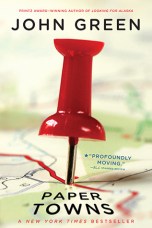 ”The fundamental mistake I had always made – and that she had, in fairness, always led me to make – was this: Margo was not a miracle. She was not an adventure. She was not a fine and precious thing. She was a girl.” – 63%

Who is the real Margo?

Quentin Jacobsen has spent a lifetime loving the magnificently adventurous Margo Roth Spiegelman from afar. So when she cracks open a window and climbs into his life—dressed like a ninja and summoning him for an ingenious campaign of revenge—he follows. After their all-nighter ends, and a new day breaks, Q arrives at school to discover that Margo, always an enigma, has now become a mystery. But Q soon learns that there are clues—and they’re for him. Urged down a disconnected path, the closer he gets, the less Q sees the girl he thought he knew…

I could have sworn that I had a copy of this on my shelves but I didn’t! I think it didn’t quite grab me and so it wasn’t even on my to-read list. It was brought to my attention – again – when I saw the trailer for the film. It looked really good and I wanted to read it before the film comes out, soon. The trailer made it look far more interesting than the blurb.

I’ve never read John Green but I knew that The Fault is in Our Stars had a sad ending and I’d heard that Looking for Alaska was a little sad too so I should have known that this one wouldn’t be all spring time and butterflies. When I went back and read over the last page though it wasn’t quite what I’d thought, it was a little more like an opening ending than a less-than-happy ending.

I liked that through the book Quentin discovered that he’d been in love with an image of Margo that he had in his mind, an image she presented to the world, but it wasn’t really her and through the book he discovers something of who she truly is and he likes her just the same. I also like how something similar to this plays out on the other side too. Neither of them were who they thought they were and that was ok.

It was a cute coming of ages story, about a boy and a girl finding out who they are and discovering each other.