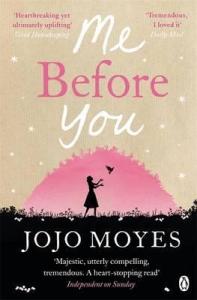 This is my A Book at the bottom of your to-read list choice for the 2015 Reading Challenge.

Title: Me Before You
Author: Jojo Moyes
Published by: Michael Joseph (UK)
Book: #1 of Me Before You
Genre: Contemporary Romance
Found: My Book Shelf (in the dusty area)
Rating: 5 Voodoos

There are a few things I’d like to tell you about me and this book before I begin my review.

1. This book has been on my book shelf and my Goodreads TBR shelf since March 2012.
2. I love Jojo Moyes’ writing with a passion – like ever since I read The Ship of Brides back in 2010!
3. I love Sam Claflin and apparently he will be playing Will in the film which comes out in 2016.

So with all that in mind why on earth has it taken me so long to get round to reading it? I’d like to say I knew this book would break me, or that I was saving it for the precise moment I thought I could handle it better but the honest answer is, I just don’t know.

You Before Me tells of Lou, a 26 year old who finds herself jobless, still living at home with her folks and her sister who has a child. They are struggling to make ends meet so Lou is desperate for a new job. Will is a 35 year old quadriplegic, who’s parents are looking for a carer who can ‘cheer him up a bit’. Will is miserable and in constant pain, he wishes to end his life in dignity and has found a place in Switzerland that will help him. He’s given his family 6 months, and they are determined to change his mind in that time. Enter Lou. When she finds out about his plan she is devastated and starts planning things that will hopefully help him see the great things still available to him.

I know it sounds depressing but its not. Its heart-warming and heart-breaking and basically takes you on an emotional roller-coaster that you never want to end.

I loved how well everyday life was described, how it paced the novel while you got to know every little thing about Lou and Will. I loved the dynamics between the characters and how easy it was to understand them and there differing views. I understood how hope really mattered, because I felt it too! In fact it was amazing how many feelings I had. It was as though this book was written in such a way that it spoke directly to my heart. It didn’t feel forced or over-done and it was beautifully balanced with a good amount of British humour just to lighten what could have been a rather heavy going theme.

In the end it made you realise how important choice is. How everyone is different and how, in the end you can’t make choices for other people. No matter how much you would like too.

I laughed, I cried (well-sobbed actually) and I fell in love. This book hit me hard and I’m so glad to hear that Jojo Moyes has written a sequel because I feel connected to Lou and the other characters in this book. I want to know what they do next. I need to know.

2 comments on “Review: Me Before You”