This was influenced by a few randomly seen pins but none specific.

But looking it up after the fact I’ve found some others I really want to try: 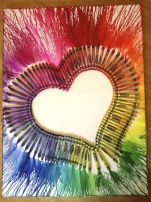 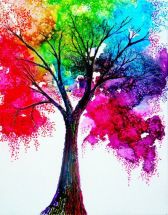 Although apparently that last is a water colour for sale, but I’m sure you can do something like that with the crayons.

I started with a bank canvas, some paper hearts, some crayons and a hair dryer.

I stuck the hearts onto the canvas with glue and then chose my colours. I originally picked out all the reds and pinks but I was worried it wasn’t enough so I added a blue and a purple. This was roughly 7 crayons, I wouldn’t recommend less on this sized canvas. I believe that a hairdryer is used because it’s hot AND blowy, however the one I was using gave up after about 30 seconds so I had to borrow a heat gun (used for embossing.)

The heat gun didn’t have the power behind it so what I had to do was reheat the blobs that I’d covered the canvas with and blow. It was pretty effective! I recommend turning the crayon in the heat, so that melt is even and that way lumps of crayon don’t fall off. Unfortunately the heat gun had to be held close to the canvas so it melted the glue and the crayon got underneath.

I got around this by carefully scratching off the extra crayon with a craft knife. It’s not ideal but it’s effective and it still looks good. I think that next time I’ll certainly use a hair dryer (that works), it makes far more sense! and possibly card to stick down. Hopefully the thickness of the card and the added distance with the power of the hair dryer will prevent the crayon from getting under the parts that needed to be white. On another note, melting crayon stinks….

Have you tried crayon art? How did you do it? What would you make?