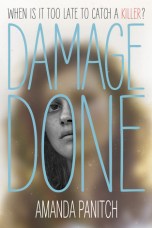 WARNING: This review may contain spoilers and/or descriptions that maybe upsetting for some readers.

22 minutes separate Julia Vann’s before and after.

Before: Julia had a twin brother, a boyfriend, and a best friend.

After: She has a new identity, a new hometown, and memories of those twenty-two minutes that refuse to come into focus. At least, that’s what she tells the police.

Now that she’s Lucy Black, her fresh start has attracted the attention of one of the hottest guys in school. And someone much more dangerous. She thought her brother’s crimes were behind her. But now she’s being forced to confront the dark secrets she thought were safely left behind. How far will Julia go to keep her slate clean?

One thing is clear: The damage done can never be erased. It’s only just beginning. . . .

In this deliciously twisted contemporary thriller, family can be a real killer. For fans of We Were Liars and readers who love unique multiple perspectives that leave clues like breadcrumbs until they reach the stunning conclusion.

Wowsers! Does this book pack a tension filled punch! I will admit to having guessed the finale around about 50% but it didn’t stop me from enjoying every minute of this twisted and disturbing story!

Damage Done is all about Lucy, who used to be Julia, one half of a set of twins. But Lucy has no brother. Not since Ryan decided to shoot all eleven other members of Julia’s band class killing them all and then attempting to kill himself. Now Lucy lives in a new town, with new friends and is never allowed to mention Julia’s brother Ryan. But when Lucy spots a face from her past, she is at risk of loosing everything she has worked so hard for.

There were so many moments in this book that made my skin crawl, and surprisingly, it wasn’t necessarily the gory bits. Granted, the bits about mutilated dogs and gun shot wounds were pretty grim but it was actually the attitudes of some of the characters that had me shivering with disgust. I found it really troubling how little care, time and communication Lucy/Julia’s parents had to offer their two children. They seemed to completely deny all responsibility for their children and the behaviours they exhibited. I know its easy to blame the parents, and yes perhaps Ryan was always going to end up the way he did, but I still found it ridiculously infuriating that they didn’t TRY to help him. Just palmed him off of psychologists and requested drugs to make him better. Even when they just had Lucy/Julia they couldn’t even be bothered to cook her dinner or even look at her. Seriously?! Who allowed these people to have kids? The psychologist wasn’t much better though. He didn’t seem to report to anyone else and got excited that he may have a future ‘socio-path’ to treat.

Amanda Panitch had a great writing style. It flowed and drew you in, it kept you wanting to read just a bit more… Amanda Panitch dropped some amazing hints throughout but I loved how they slowly increased in frequency, slowly breaking down everything you thought was real. For me, the façade seemed to start to fracture and the emotions started to intensify, leading me to devour the last 50% in a couple of hours just because I felt so wired!

I enjoyed that there were journal entries from the psychologists that gave a professional view on events. But much of the book was written from Lucy’s point of view first, and so you mainly saw things from her perspective. As she couldn’t remember anything from the moment her brother came into the band room brandishing a gun, till she walked out, covered in blood, (the only survivor)… the events of that day were given in short and very blunt statements as they were ‘quotes’ from newspapers and reports of the day. These worked really well because they lacked all emotion and therefore were quite shocking and also really intriguing.

Lucy came across as extremely broken. She seemed numb because of what had happened to her. She still loved her brother but had no one to talk to because no one was supposed to know, because if they did, she might be forced to move again. People can’t help but blame the relatives when there is no one to punish.

There was a really weird romance between Lucy and Michael. He reminded her of her brother and yet she started to fall in love with him. It was a little  creepy. But Michael was a lovely character, the knight in shining armour who wanted to help her and make her better.

The reason this didn’t get the full 5 star rating was because of the ending. I didn’t like it very much. It felt fake in comparison to the rest of the novel. I’d enjoyed the realism, it was what made the rest of the novel so shocking. But the ending was just overly dramatic and unfinished. It left me with a sour taste in my mouth. Perhaps I just like to sleep better at night knowing that socio-paths are always caught and dealt with.

Never-the-less Damage Done was a stunning debut novel that I’m not going to forget in a hurry. Amanda Panitch is very talented in my opinion.