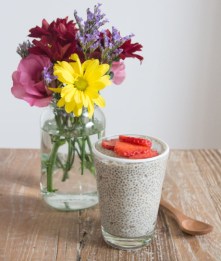 This is a breakfast recipe, despite the ‘pudding’ part of it’s name, it’s not an actual pudding.

This recipe is by Ella Woodward of Deliciously Ella and can be found on her blog HERE as well as her app.

I have to say, this is kinda weird. It looks like frogspawn and the way I made it (we’ll get to that) it didn’t taste of much, but once I’d eaten it, I drank my coffee and immediately missed the taste of it in my mouth. I made 2 and a 1/2 portions of this for the three of us yesterday, that’s all the chia seeds we had and learning from the porridge, these recipes make big portions. That was more than plenty and would have done four. As it is the extra went into a jar for me to have this morning! I can’t wait. So you might want to consider halving the recipe if you’re only making for one.

I have to confess this wasn’t the Make it I had planned, you’ll hear about that next week, but having made this for the first time yesterday, I had to tell you about it. I think, if you made it properly and ate it with the things she eats it with it will have more taste.

The way I deviated from the recipe (found through the link above) is as follows:
There was no coconut yogurt, not even coconut flavoured yogurt! so I used Greek style yogurt with honey and threw in some desiccated coconut in the hopes that it would make up for the lack (I don’t think it did)  I put it all in a glass dish that had a lid and shoved it in the fridge over night like you’re supposed to.

Unfortunately my Chia seeds picked up static from somewhere, so dispite my best efforts there were chewy bits, but that’s pretty much it made. She doesn’t kid when she says it’s quick and if you did make it in a jar, then you reall can grab and go! Though you may want to take a few moments to add something, but to be honest, it tastes pretty good naked. I can’t wait to try it properly and play around with it too. I think adding raspberries to it before it goes in the fridge should taste pretty amazing too.