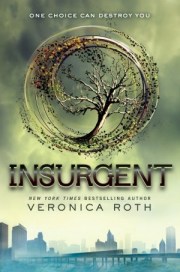 “Ah but did you have a ledge overlooking an underground river? Or a room where you faced all your nightmares at once?”
“No. And to be honest, I’m kind of ok with that.” - page 216

They survived Divergent, but now is not the time to relax for Four and Tris, their trials are just beginning.  Wracked by grief and guilt, Tris becomes ever more reckless as she struggles to find the answers so many people gave their lives for. Their enemies will stop at nothing, pushing them further and further, forcing them to find new allies over and over. Their society is in tatters and the fighting intensifies as each faction tries to gain power in this new world order. But there’s something brewing, something more sinister and Tris will need to make a difficult choice, sacrificing much along the way.

I started to dread this book after the excitement wore off. Why? Not any reason to do with this book specifically, but sequels in general. They follow a trend. If there was a previous love triangle, this is where it gets ‘tense’, if not then most likely the two, terribly in love mains pledge to love and trust each other, then go about keeping secrets that drive an ever growing rift between them. This often sacrifices much of the storyline focus, as I felt it did here. Perhaps it was just how I feel about them, but I was quite preoccupied with how annoyed I was and don’t think I paid enough attention to the plot, though I don’t believe I missed anything. I was so disappointed when the rift came, having had a great first book with no love triangle in sight (almost unheard of!). And yet, I didn’t put the book down and walk away, I kept going, so I guess that speaks for itself.

Tris is a far stronger character than those often found in YA books, she agonised over far more reasonable things than many teen heroes do. Obviously, being sixteen, you can excuse her many of her miss-choices through lack of experience and I’m sure there are many more great things for her to do yet.

I’m rather enjoying Roth’s writing despite the annoying presence of one of the two most over used situations ever found in YA fiction. (Have you noticed I REALLY hate these two!?)

Of course, now I’m nervous about reading the last one…