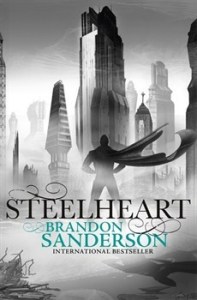 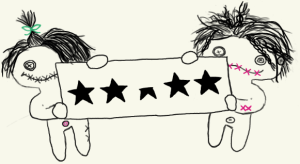 “I know, better than anyone else, that there are no heroes coming to save us. There are no good Epics. None of them protect us. Power corrupts, and absolute power corrupts absolutely.” Loc 191

Ten years ago, Calamity came. It was a burst in the sky that gave ordinary men and women extraordinary powers. The awed public started calling them Epics. But Epics are no friend of man. With incredible gifts came the desire to rule. And to rule man you must crush his wills.

Nobody fights the Epics… nobody but the Reckoners. A shadowy group of ordinary humans, they spend their lives studying Epics, finding their weaknesses, and then assassinating them.

And David wants in. He wants Steelheart – the Epic who is said to be invincible. The Epic who killed David’s father. For years, like the Reckoners, David’s been studying, and planning – and he has something they need. Not an object, but an experience.

I’ve never had the nerve to pick up a Brandon Sanderson books before. It’s not that his stories don’t appeal to me, because they really do (I have many on them on my goodreads TBR list) and it’s not because they have terrible covers (because lets be honest all his covers are awesome!) and I can’t say it’s because I’ve not got access to any of his books, because my brother is a massive fan and has most of his books, and he leaves them randomly on every surface of our house. So I can only presume its somethings silly like the length of each book or the fear of not liking someone so loved by everyone else. Whatever the reason I feel really silly right now! I can’t believe I put off reading his books for so long! Steelheart was amazing and, according to some of his hardcore fans this isn’t one of his better books! Can you imagine?! Does this mean my brain will explode when I read one of his other novels?

Anyway, Steelheart is based on the really interesting concept that power corrupts everyone. The world as we know it has been changed forever by the appearance of something called Calamity, a bright red light in the sky. After it arrived some of the population developed superpowers and began to take what they wanted from others, destroying most things and killing many. We follow an 18 year old called David who has lost everything because of one super-villain known as Steelheart. David joins forces with a rebel group called The Reckoner’s in the hope of exacting revenge on this evil (seemingly invincible) Epic.

I really enjoyed the overall feel of this book. It felt a bit like a Marvel movie. Something slightly familiar because of its good vs evil feeling. I loved the conspiracy theories and how the Epic’s all had weaknesses that you had to figure out before you could defeat them.

I liked the different personalities in the team, it was like watching any war film, were the camaraderie is key to the story working as a whole. I felt this was really well done, although, I hope that in the next book we will get some of their back stories. Certain characters worked better in this book because we saw glimpses of who they were before…Cody and Abraham for example. I liked that David was a bit immature, a bit geeky and just a bit awkward, it made him seem more realistic and I honestly loved his improvising. Everyone has flaws. The character that didn’t really work for me was Tia but possibly because we hardly got to know her.

I think the only thing that ruined it a bit for me, because it started to grate on me, was the slight repetitive nature of some things. Like Davids constant talk of guns and how awesome they were. I get it, he likes guns! But really, in the end, I can forgive that.

Overall this book had a unique and entertaining concept, and had a great pace. It was so good I devoured it in 2 days. I can’t wait to see what book two has in store for us. Will a good Epic appear to stand up for the humans or is it genetically not possible to have a good Epic? We will see…