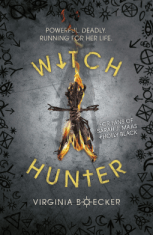 Sixteen-year-old Elizabeth Grey doesn’t look dangerous. A tiny, blonde, wisp of a girl shouldn’t know how to poison a wizard and make it look like an accident. Or take out ten necromancers with a single sword and a bag of salt. Or kill a man using only her thumb. But things are not always as they appear. Elizabeth is one of the best witch hunters in Anglia and a member of the king’s elite guard, devoted to rooting out witchcraft and bringing those who practice it to justice. And in Anglia, the price of justice is high: death by burning.

When Elizabeth is accused of being a witch herself, she’s arrested and thrown in prison. The king declares her a traitor and her life is all but forfeit. With just hours before she’s to die at the stake, Elizabeth gets a visitor – Nicholas Perevil, the most powerful wizard in Anglia. He offers her a deal: he will free her from prison and save her from execution if she will track down the wizard who laid a deadly curse on him.

As Elizabeth uncovers the horrifying facts about Nicholas’s curse and the unwitting role she played in its creation, she is forced to redefine the differences between right and wrong, friends and enemies, love and hate… and life and death.

The first book in an incredible new series set in a fantastical medieval world.

I have to admit that I found this semi slow to start and about 46% I left it for a day. I thought I hit a rut, but actually I’d just hit the down point and it got so much better after that, I was so relieved.

This is a country at war against magic. They believe that the problems they have stem from it and this is why they have witch hunters. Of course, if this were the whole truth, what sort of story would this be?! Short, that’s what. Elizabeth is an interesting character. She’s been following her friend ever since they met, but their lives are about to take very different paths and she’s going to have to stand on her own feet. I think she’s a little surprised she can too.

I have to say, I think that John is my favourite character. He has an amazing father and the best hair known to man (or woman), it’s just crazy. Though I have to admit that I found Fifer to be thoroughly annoying at first, I thought she was there to be unnecessary conflict, but they all grow on each other.
I was also worried about the secrets flying all over the place, but actually they were revealed with surprising regularity and it was actually enjoyable to watch each different character react to the same secret separately. It was almost as good as reading the same story from different points of view, which is something I love.

I Didn’t like Backwell at all or Caleb, he was pretty much useless though I hope we haven’t seen the last of him yet, he needs a lesson or two taught to him. And he’s not the only one! There’s someone who was pretty awful but doesn’t realise it and he needs a wake up call too. He might just be in the middle of getting it and I have hopes for his future.

This series has so much potential and I can’t wait to see where it’s going. I’m sure we’ve not even begun to find out the answers to all that’s going on in this world.