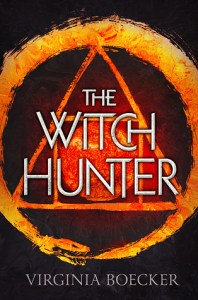 ‘We were almost destroyed by magic. We warned them to stop, but they didn’t stop. Now here we are, standing in a dirty square under a dirty sky, forcing them to stop.” Loc 17

Sixteen-year-old Elizabeth Grey doesn’t look dangerous. A tiny, blonde, wisp of a girl shouldn’t know how to poison a wizard and make it look like an accident. Or take out ten necromancers with a single sword and a bag of salt. Or kill a man using only her thumb. But things are not always as they appear. Elizabeth is one of the best witch hunters in Anglia and a member of the king’s elite guard, devoted to rooting out witchcraft and bringing those who practice it to justice. And in Anglia, the price of justice is high: death by burning.

When Elizabeth is accused of being a witch herself, she’s arrested and thrown in prison. The king declares her a traitor and her life is all but forfeit. With just hours before she’s to die at the stake, Elizabeth gets a visitor – Nicholas Perevil, the most powerful wizard in Anglia. He offers her a deal: he will free her from prison and save her from execution if she will track down the wizard who laid a deadly curse on him.

As Elizabeth uncovers the horrifying facts about Nicholas’s curse and the unwitting role she played in its creation, she is forced to redefine the differences between right and wrong, friends and enemies, love and hate… and life and death.

The first book in an incredible new series set in a fantastical medieval world.

There were aspects of this book that were amazing, close to 5 star territory but it was let down by some long slow passages and some slightly flat secondary characters.

Elizabeth Grey is a Witch Hunter in England during the Witch Trials and Burnings. In this alternative reality, magic is real and used by many. But after a Wizard tried to kill the royal family by releasing a deadly plague (subsequently wiping out a large proportion of the general populous), the remaining royals decreed a ban on any magic. Anyone found performing any type of spell or casting or even handling items with magical properties should be tried and if found guilty, burned at the pyre or tortured for information. But as we know things are never as black and white as they first appear. And this is where the adventure begins.

Elizabeth Grey was an interesting main character. She had a very blinkered view of her world but I felt this was justified because she was so scared of being left behind that she didn’t really question what was asked of her. I actually really liked the dynamics of her relationship with Caleb, it was obvious she was besotted with him but like a child with an idol rather than a lover. Caleb seemed to care about her, but only when it didn’t prevent him from something else and as Elizabeth started to grow, as a character, she starts to see his flaws. I kind of wished we’d had a little bit more of their relationship because I found it disintegrated a little too fast.

I actually liked all of the Reformist characters we met but felt, all but John, were slightly under developed. It’s odd because the middle section was slow because it was filled with memories of Elizabeth’s. It helped us understand her but it meant there was very little interaction between her and her current company. I really didn’t like Fifer at the beginning. i hated that she was introduced as the snotty jealous other girl. I kind of wanted her to have a bit more about her. I also didn’t like how Elizabeth and Fifer ended up going to a party together considering neither girl liked each other. It didn’t really make sense at the time. I also found George and Schuyler to be rather interchangeable. They had similar character traits and seemed to occupy the ‘annoying male friend’ category. I’d like to see more of George in the next book because he seemed the least developed character to me. He was always unfazed by big revelations (did he have some magical talent???) and seemed to hint at sexual orientations and perhaps feelings for John but these never got elaborated.

I really enjoyed the relationship that developed between Elizabeth and John. It was sweet and wasn’t rushed. I think this was the redeeming aspect for me along with the fully packed ending! I loved the confusion that developed at the end, you weren’t sure what was real and what wasn’t but that made it exciting. I loved the ending and how it will obviously bound Elizabeth and the Reformists together for the next book.

Overall I did enjoy Witch Hunter a lot and I can forgive the pacing issues at the beginning because I do feel I developed a good understanding of Elizabeth because of the flashbacks. I will be interested to see where the next book goes. Hopefully with Bad Guys getting their comeuppance’s and  hopefully (fingers-crossed) the return of Caleb (because I want him to realize what he’s missing out on).