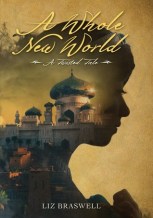 Welcome to a new YA series that reimagines classic Disney stories in surprising new ways. Each book asks the question: What if one key moment from a familiar Disney film was changed? This dark and daring version of Aladdin twists the original story with the question: What if Jafar was the first one to summon the Genie? When Jafar steals the Genie’s lamp, he uses his first two wishes to become sultan and the most powerful sorcerer in the world. Agrabah lives in fear, waiting for his third and final wish.To stop the power-mad ruler, Aladdin and the deposed Princess Jasmine must unite the people of Agrabah in rebellion. But soon their fight for freedom threatens to tear the kingdom apart in a costly civil war.
What happens next? A Street Rat becomes a leader. A princess becomes a revolutionary. And readers will never look at the story of Aladdin in the same way again.

Well, this confused me. I was sure this was for a younger audience but it got rather dark in there so I thought I had been wrong. But when getting the above description, I discovered it said for 12 and up. 12 seems a little young to me…

I have to say, in the end I didn’t like this too much, but I’m not sure how much of that is because of the format of my copy, (obviously the pages are supposed to have ‘decoration’ around the edges and yet being an e-copy it just meant that at the end of each page there was a mostly blank page with a picture of a blank pages and a line or two of writing at the bottom, which was understandably annoying, I’m sure if I had contacted the publishers they would have sorted that for me, but I was convinced at the start that I wouldn’t be bothered at all.) and how much is to do with the actual story itself.

I have to admit to surprise when Aladdin’s friends were introduced, but then I guess he would have had friends, wouldn’t he? And I loved the start, where we met his mother (though my first thought was that we’d bypassed what we knew and were straight into the resistance portion of the entertainment).

I enjoyed watching Aladdin and Jasmine form their connection without the lie of his being rich and a prince, but I thought that Jasmine was made rather dark and we didn’t really see too much of the characters, almost like we were given the bare minimum, because we’re expected to know them already and this left a gap that was filled with descriptions that seemed distracting to the storyline. We didn’t learn more about anyone particularly much at all which was sad and largely what I was hoping for, that the characters would be given greater depth and personality.

And then there is The End. Not the end I was expecting, in anyway to be honest. (Anyone else waiting for the circumstances and the re-quote “PHENOMENAL COSMIC POWER itty bitty living space.” will be just as disappointed as I was!)

Actually, perhaps I over estimated the book before I started and that was the issue. Nothing can compare to the film, because the film is 97% Genie and Robin Williams basically ad libbed that and this is TWISTED so it’s not 97% Genie…

In short, please don’t go into this expecting to see Genie, he’s not there. And also don’t go in expecting the book to get back to the end of the film, that way you will hopefully love it! Unfortunately I did both those things and I can’t claim to love this book.