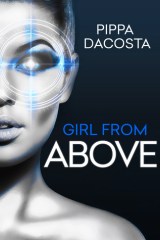 When Captain Caleb Shepperd is released from prison, all he wants to do is keep his head down and earn a living smuggling illegal cargo through the nine systems. So when a synth stows away on his ship, and brings with her a crap-ton of problems, including guilt-ridden secrets he thought he’d escaped, he’d prefer to toss her out the airlock. The problem is, she’s priceless tech, and he’s fresh out of credit.

#1001 is not meant to exist. Created for a single purpose, she has one simple order: to kill. But not everything is as it seems. Buried deep inside, she remembers… Remembers when she was human. And she remembers what Shepperd did to her. She’s not ready to die, but she is ready to kill.

From the bestselling author of the Veil Series comes an action packed story of love, redemption, and revenge.

Pippa DaCosta captures the grit and realism of her urban fantasy stories and injects it, along with some down-and-dirty passion, into the sci-fi genre.

WARNING: 18+ only. Contains graphic adult content, including sex, drug use, violence, and a plethora of curse words. Not for the easily offended.

I haven’t read a Sci-Fi book like this in ages! And gosh how I loved every page of it!

I’m not going to lie, after City of Fae I was a little apprehensive about reading another book by Pippa  DeCosta. I read City of Fae earlier this year and found it quite tedious and uninteresting but when I saw the cover for Girl From Above and saw that it was only 175 pages long… I took a gamble. And that gamble really paid off!

Girl From Above is set in a future, where space travel is possible and rich people can pay to have their consciousness transferred to a limited edition synthetic humanoid upon their death. There are only 1000 available and so the price for Life After Death is high.

The story is told in alternating points of view between #1001, a runaway synthetic (who really shouldn’t exist), and Captain Caleb Shepperd, a morally ambiguous smuggler of drugs and other illegal items. After a rather messy pick up of some illegal weaponry Caleb finds #1001 stowed away in his cargo hold and so begins his rather bad day. Caleb and his crew must run for their lives as they become the target of the authorities, the Chitec (who make the robots) and even other smugglers.

#1001 isn’t like the other synths, she seems to be able to feel, make decisions and disobey orders and she seems to remember Caleb from her past… but as her memories return will she like what she sees?

Girl From Above is fast paced and has an air of Firefly about it. It’s gritty, harsh and none of the characters are particularly nice as they all fight dirty in their struggle to survive. And this was great! I really enjoyed the complexity of all the characters as they were all hiding some secret or other. Caleb especially was covering a lot of issues from his past. Even at the end there was still a lot that we didn’t know about the different characters so I can’t wait to see what happens in the next instalment.

There is a fair bit of adult content (or sex drugs and foul language!) but this added to the overall gritty feel of the story and I think there was just the right amount of tech language and world building to make this successful without being to wordy. In my opinion this is a great little Sci-Fi novel and I’m so glad part two is already available on amazon!