by Rachel A Marks 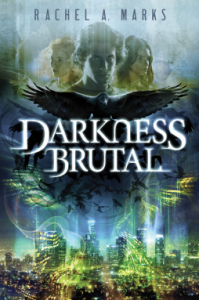 “You won’t be going into this without me. If this is death, then I’m following you into it.” Loc 5039

Will Aidan sacrifice the world’s fate to save his sister?

Aidan O’Linn’s childhood ended the night he saw a demon kill his mother and mark his sister, Ava, with Darkness. Since then, every three years the demons have returned to try to claim her. Living in the gritty, forgotten corners of Los Angeles, Aidan has managed to protect his sister, but he knows that even his powers to fight demons and speak dead languages won’t keep her safe for much longer.

In desperation, Aidan seeks out the help of Sid, the enigmatic leader of a group of teens who run LA Paranormal, an Internet reality show that fights demons and ghosts. In their company, Aidan believes he’s finally found a haven for Ava. But when he meets Kara, a broken girl who can spin a hypnotic web of passionate energy, he awakens powers he didn’t know he had―and unleashes a new era of war between the forces of Light and the forces of Darkness.

With the fate of humanity in his hands, can Aidan keep the Darkness at bay and accept his brilliant, terrifying destiny?

It’s been a while since I’ve read a urban-fantasy of this standard and I’m so excited! Darkness Brutal is a fast-paced urban-fantasy with thrilling paranormal aspects. Rachel Marks successfully created a gripping and believable setting when she blended the paranormal with the familiar setting of Los Angeles. The whole story was gritty and edgy. I loved her use of theological and historical events to give her story a convincing and yet disturbing backdrop.

The story follows Aidan, a young man who is struggling to hide that he can see demons. He is alone, save for his sister who he visits whenever he can. His sister has spent her whole life bouncing around the foster care system, but not because she is an unlikable child, but because every three years, the people around her die, a bloody and terrible death. A demon is after her, and Aidan will do anything to protect her. With her 12th birthday fast approaching Aidan is desperate to find a way of hiding Ava from the Demons. So Aidan seeks help from a person he can trust and finds himself being introduced to Sid and his house of misfits. They are not ordinary lost kids, these kids also have abilities. And together they vanquish ghosts and other paranormal beings. Can they help him? Can he finally find a way of breaking the cycle? He must learn to trust them and perhaps in the process find out what he is and why the Demons want his sister.

So often with this type of story we are left with a whiny female main character that does nothing but complain about how unfair her life is.  So it was so refreshing to find a male lead who, while living a rather crappy existence, seemed to make what he could out of life, for himself. He was kind, and constantly put others first and yet, Aidan still seemed realistically male. He was driven by hormones but without all the emotional up-helve that we are used to finding in urban-fantasies, and he spends most of the book actually concentrating on finding a way to help his sister rather than mooning over the females. Yes there are multiple love interests in Darkness Brutal, but surprisingly it works. For me, it was the lack of emotional turmoil that helped this love-triangle stay away from being irritating. He obviously cares for both girls, and this comes across in his ‘knight-in-shining-armour’ routine, but he doesn’t spend the whole time dissecting his feelings or talking about the colour of their eyes etc etc. This was one of the most successful main characters, I’ve seen in a long time.

The only real issue I had was with the constant secret hiding! For some reason all of the characters seemed to be with-holding vital information to ‘protect’ each other. Even Aidan would demand answers from people, whilst hiding an influential key piece! It was infuriating and felt like a tactic employed to drag out the story. I presume it was meant to show that there wasn’t enough trust between the characters yet??? I hope so anyway…

In the end though, this niggle was overpowered by the intriguing nature of the story itself and the likeable dynamic of the team. I really loved the myriad of characters and can’t wait to find out more about them as the series continues. Bring on book 2!

I would recommend this series to lovers of Supernatural (the TV series) and (the book series) Lockwood & Co. by Jonathan Stroud.