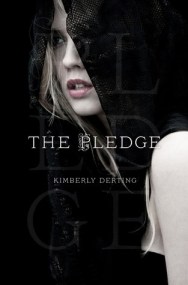 “I loved voices, I always had. Words held meaning, but voices held emotion.”

In the violent country of Ludania, the classes are strictly divided by the language they speak. The smallest transgression, like looking a member of a higher class in the eye while they are speaking their native tongue, results in immediate execution. Seventeen-year-old Charlaina has always been able to understand the languages of all classes, and she’s spent her life trying to hide her secret. The only place she can really be free is the drug-fueled underground clubs where people go to shake off the oppressive rules of the world they live in. It’s there that she meets a beautiful and mysterious boy named Max who speaks a language she’s never heard before . . . and her secret is almost exposed.

Charlie is intensely attracted to Max, even though she can’t be sure where his real loyalties lie. As the emergency drills give way to real crisis and the violence escalates, it becomes clear that Charlie is the key to something much bigger: her country’s only chance for freedom from the terrible power of a deadly regime.

I’m going to be honest here, I nearly didn’t finish this book. I was about 200 pages in and I wasn’t happy with things. At which point I sort of just skipped through it, which I’m glad I did. The book didn’t get any worse and actually in the end It was pretty good. I wont be reading any more from the series though, I think book 1 ended in an amazing place so why ruin it?

The book was interestingly set up, most of it’s in first person from Charlie’s point of view, but every now and then you get another point of view, in third person to cover something Charlie wasn’t there for which keeps it fresh. Other points of view included Max and The Queen, so you get a good grasp of what’s going on.

I’d have liked some more information on the ‘revolutionaries’ but I may have got that in the bit I kinda skipped through so I cant really comment on that too much. I’d also have like to know more about these queens but that may be covered in a later book that I’m not reading.

I think I have to say that my favourite character was Angelina, so young and already very wise. Not seeing more of her is one of the few things that I’m sad about and I would have considered possibly reading book 2, except there was a preview in this book and it’s unfortunately put me off. But the cover! So pretty.

All in all a better book than I thought but I wont be continuing the series, my fear of possible book 2 conflicts is too high…