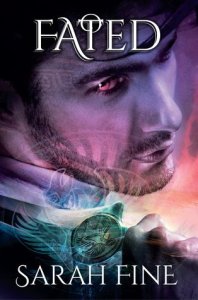 Aislin Ferry and Jason Moros have only days until they will be called to account before the Keepers of the Afterlife. Yet as they race to restore order and make their case, their worlds fall into total disarray.

Mutiny within the fractured Ferry family threatens Aislin’s hold on power and role as Charon. Meanwhile, the fearsome Lord of the Kere has family trouble of his own. Someone is unraveling the fabric of fate, and Moros suspects one of his supernatural siblings is behind the terrible bid to unleash Chaos.

Now unlikely allies, Aislin and Moros each need the other to escape the wrath of the Keepers. As the stakes rise, it becomes clear that protecting their respective empires is not the endgame. With the fate of all humanity dangling by a thread, Aislin and Moros must surrender completely to one another if they are to fight their common enemy. And as time runs out, someone must make the ultimate sacrifice.

SOOOOO excited for the next instalment of Servants of Fate!I read Marked (#1) and Claimed (#2) earlier this year and loved every minute of it!

This is a great Paranormal Romance series. It’s a little cheesy in places but there is something really addictive about it that had me pre-ordering this next book minutes after finishing book 2. The whole series is centred around a family called the Ferry family and they are basically Ferrymen who transport souls to either heaven or hell but someone is trying to prevent them from doing their job and its causing chaos in the human world as well as the inbetween. I love that while all this action is going on we have some amazing love stories.

I can’t wait to see a relationship begin between the rather cold hearted and stuck up Aislin, and the extremely mysterious Moros. I also hope we see more of the other couples from books 1 and 2. I don’t want to give things away in case you guys want to go read them…