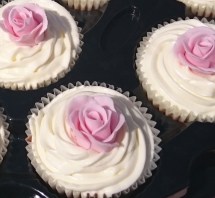 This is a pin that I was asked to re-create for a friends wedding.

Original pin and link to blog/site:

One of my oldest friends found himself a wonderful woman and they are now happily married and off on their Honeymoon! For their big day, I made some cupcakes to resemble the picture above. I made a lemon cake and icing and added pale pink flowers. Below is how I did it all! Including making the roses…cause they’re not as hard as you’d think.

I made the roses first, they need to dry, it was recommended you make them a day or two in advance, but to be honest they don’t seem to take too long to dry. For this you need flower modeling paste/ Gumpaste because apparently in some places “sugarpaste” and “ready-to-roll icing” are the same, instead of sugarpaste being stiffer.

I learnt how to make these from this video HERE by Alan Tetreault, everything I learnt about the process I learnt from this video. If you’re going to do it on a large scale, I’d recommend buying a few things. You CAN shape the petals by hand, but they will tale a long time and will not be uniform. You can buy single petal cutters or you can buy 5 petal cutters, obviously, the 5 petal cutters take a lot less time, so large quantities are a breeze. Alan used a pasta machine to make his thin, but I used a mini rolling pin. You also need some cornflour, a board, a ‘flower forming mat‘, a ‘ball tool’ or apparently a ‘flower making and modeling non-stick rolling pin‘, a brush and some water, or a waterbrush and something to put them in!

You need to roll out some paste quite thin and cut two sets of petals, you also need to form a small teardrop piece of icing to form the centre of the rose. You can buy some but in doing so your roses wont be fully edible. Then, with the ball end of the forming tool you need to rub it across the edge of the petals, half on half off the paste to thin out the petals, I also ran it around the middle of the petals because mine were a little thick.

The process of the thinning of the petals gives it a sort of a frilly look which is exactly what you want. Next you need to pick one petal set up and using the water brush you need to wet the petals, the centre to hold the teardrop then two petals opposite each other. I started to flip them over so that the top became the bottom because the way I’d thinned the petals made it look better when I did this, I don’t know if it’s because I’m left handed or just because I preferred it that way.

Fold one of the petals tightly around the teardrop centre one side at a time so that it’s completely covered and you have a little bud point, do that with the second one too and then wet half of each of the remaining petals. Apparently it doesn’t matter which you use next, but I found that it looked best when I used the one of the two next to each other that overlapped the last one I’d used, not the one that covered it. Then you just wrap the rest around in the same way and you have a bud! If you want to keep a bud then this is where you stop. For a full rose you keep going.

Next you need to wet the centre and half of all the petals of the second petal set. Place the bud in the middle on the petal set and start wrapping them around. You need to position the bud so that the next petal you fold up overlaps. Whichever side is not going to be overlapped by the next petal needs to NOT be pressed down, the last petal folded up needs to be tucked INSIDE it to create the perfect rose. All that’s left to do is neaten up your rose, curl or stick anything down that you feel you need to before you store it. 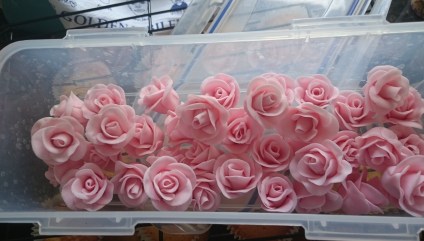 (Please note, this is once they are all dry. You need to be careful why they’re still soft or they’ll end up funny shapes).

Next you need to make some cakes (or a cake) to put them on. I made a basic mix and while the butter and sugar were getting all nice and fluffy and white I grated the rind from 3 lemons and juiced them. Please note: it is not advised to grate your nails or fingers… Once I was done I added the lemon rind to the mix and beat it some more. I then added the eggs one at a time alone with a spoonful or two of the flour to stop it separating.

Once it was all mixed, I added in about half the lemon juice, I did this to taste so you can choose to add less or more. Then I baked it! Once they were all baked and cooled it was time for the icing!

Icing sugar, butter and the last of the lemon juice, to taste. Then I loaded it into an icing bag and piped it out! I started in the middle and built it up before working out and then back up to make a nice shape.

Once you’ve iced it, nicely it’s time to stick the dry rose into the icing. My icing was soft because it was warm so when I pushed in the rose it all just resettled around it perfectly. And you’re done! I left them mine in the fridge to set overnight before the wedding. With a nifty cutter that goes through a spellbinder cutting machine, we made some nifty skirts to make them all pretty. 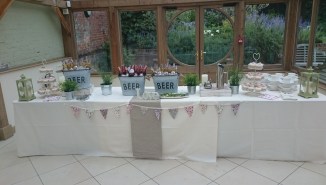 Then we handed them over to the staff and they set them up in the cupcake stands. I received a lot of compliments for them and none were left at the end of the evening, so if you plan on making them, they’re a winner!