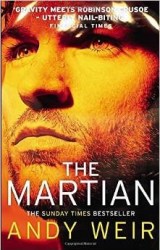 Six days ago, astronaut Mark Watney became one of the first people to walk on Mars. Now, he’s sure he’ll be the first person to die there. After a dust storm nearly kills him & forces his crew to evacuate while thinking him dead, Mark finds himself stranded & completely alone with no way to even signal Earth that he’s alive—& even if he could get word out, his supplies would be gone long before a rescue could arrive. Chances are, though, he won’t have time to starve to death. The damaged machinery, unforgiving environment or plain-old “human error” are much more likely to kill him first. But Mark isn’t ready to give up yet. Drawing on his ingenuity, his engineering skills—& a relentless, dogged refusal to quit—he steadfastly confronts one seemingly insurmountable obstacle after the next. Will his resourcefulness be enough to overcome the impossible odds against him?

This was going to be my “set in the future” book of the 52 books in 2015 challenge, but instead it’s my “made me cry” book. Why? Well, a man is stranded on Mars and the planet pulls together and saves him that’s why. While it didn’t seem like the world was one big happy family in this future, they certainly were willing to work together to save a guy stranded.

I was recommended this book by a colleague and told to read it before the film came out. So I have and oh boy! I loved it! It was hilarious and sad and amazing.

Mark is accidentally left for dead on Mars but instead of giving up he uses all of his botanic/mechanic skills to keep himself alive. Towards the end of the book, it did seem that everything that could go wrong did go wrong, including stuff that shouldn’t have and I wasn’t sure if it was to show how crappy Mars was or if it was just to amp up the drama.

Most of the book is the logs written by Mark on the planet but after some time we start to see what happening on earth as they discover he’s still alive and then as they start to try and find a way to send him more food. It’s his multi skills that kept him alive and I’m not sure another combination would have been enough for survival. So basically, if you’re going to mars you need to be a mechanic botanist if you want to survive accidental abandonment.

It’s hard to read this book and have a character other than Mark as your favourite, considering he’s the only character for a lot of the book and ’cause he’s hilarious AND a genius, though Mitch is pretty up there. He’s brilliant in fact, and I love him for what he did. Only two people know what that was though and the other guy wasn’t so impressed, the fool.

I would recommend this to sci-fi fans. It’s also a good ‘man book’, as so many of the books I read seem to be aimed at teen girls, I feel comfortable saying this. Now I’m just eagerly awaiting the film.

2 comments on “Review: The Martian”