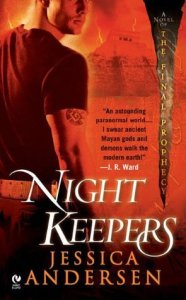 The end of time looms, and Mayan demons have surfaced from the underworld to trigger an apocalypse. But as the final day approaches, the descendants of ancient warrior-priests prepare to fight back….

As a Miami narcotics detective, Leah Daniels never knows how her day will turn out. But she certainly doesn’t expect to be strapped to a stone altar as the human sacrifice in an ancient Mayan ritual meant to coax a demon from the underworld – or to be saved by a handsome warrior-priest king, who claims to recognize her from his visions.

Striking Jaguar thinks he is the last of the Nightkeeper warrior-priests, but as the end-time approaches, his mentor reveals there are twelve others. In reuniting them, Strike – king by birthright – gains the power to summon a Mayan god to combat the demons. But the woman of his visions is the gods’ chosen sacrifice. Now he must decide between love and duty…or find another way to invoke otherworldly magic in a death-defying race against the end of time.

It’s been quite sometime since I read this book. 3 years in fact. Don’t you just hate it when you thoroughly enjoy a book and then completely forget to check out the rest of the series? Well that is definitely the case with Nightkeeper. I really have to return to this Mayan infused urban fantasy series. Hopefully this will be the reminder I need to dig it out and start this series again.

I would recommend this to anyone who loves urban fantasies with well developed characters,enjoys interesting takes on Mayan history, and finds smoldering romances with hunky males, who are meant to be guards against evil, thrilling.
(I’ll have to let you know if the rest of the series holds more of the same but fingers crossed).

Here’s my rather short review that I wrote back in July 2012.

I was really surprised by this one actually. None of the people I follow or are friends with had read this book so I went in blind (haven’t done that in a long time!) the premise was intriguing and the promise of Mayan rituals and sexy warrior princes wouldn’t let me pass this one by.

I loved the way this book was structured. Its not one of those, lets start by introducing everyone and get to know them, no this one throws you straight in, I mean literally straight into high tension, skulls being crushed, massive monsters battle scenes the lot! Wow! Thankfully it calmed down a bit in the middle and did the necessary role calls but by that time I was gripped and didn’t care that there were so many characters to remember. And of course there is a splattering of steamy erotic scenes but all in the name of the Gods obviously

I will be ordering book two soon as.