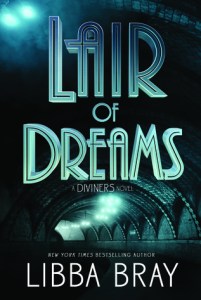 ’…dreams can’t be contained for long. Their natural trajectory is forward. Out. Up. Away. Past all barriers and borders. Into the world. This is true of nightmares, too.’ Loc 4487

After a supernatural showdown with a serial killer, Evie O’Neill has outed herself as a Diviner. Now that the world knows of her ability to “read” objects, and therefore, read the past, she has become a media darling, earning the title, “America’s Sweetheart Seer.” But not everyone is so accepting of the Diviners’ abilities…

Meanwhile, mysterious deaths have been turning up in the city, victims of an unknown sleeping sickness. Can the Diviners descend into the dreamworld and catch a killer?

Lair of Dreams is a wonderful paranormal, historical fiction. Libba Bray weaves a beautifully vivid picture of the vibrant and hope-filled 1920′s New York scene and mixes it with the idea of Diviners, people with special powers. While I didn’t find Lair of Dreams as captivating as it’s predecessor, The Diviner’s, I was glad to see that it still held the same amount of charm and impressive world, and character development. Libba Bray’s writing is nothing less than marvellous. It’s beautiful, eloquent, and breath-takingly descriptive.

Much of the focus of this book concentrates on a new character Ling and a secondary character from the first book Henry. I didn’t really connect with Ling and I think this was why it took me longer to read this sequel. Ling is a little dry, she doesn’t really have a sense of humour and it makes her a little hard to like. I felt sorry for her, but that was about it. Thankfully her lack of personality was balanced with Henry, as he has humour in abundance! I really enjoyed finding out about Henry, how he came to be in New York, and finding out about his and Ling’s special power, dream-walking. A dangerous gift, when a new sickness has infested the dreams of sleeping New Yorkers! Henry and Ling must find out why people are not waking up, but in order to do that, they must give up chasing their own happy endings. Unlike in The Diviners, the ending to this book was a lot sadder, and I really felt for all of the characters. Especially Wai-Mae.

Lair of Dreams, like The Diviners, is a beautifully woven tapestry, with many threads overlapping to create one glorious story full of depth and intrigue. As well as the main storyline there are plenty of other little stories going on, all entertaining in there own way, which keep us up to date with the other characters we met in The Diviners. The main character of the first book, Evie, was actually really irritating in this one. I didn’t like her at all! Rather than continuing her development away from being a selfish cow, she seemed to have done a complete 180 and was even worse then ever, constantly snubbing her friends, letting them down, and then complaining about how unfair her life was and can’t they just forgive her… then doing it all over again. I actually hope she ends up alone. It’s what she deserves.

There were so many threads left hanging as Lair of Dreams came to a close but I have no doubt these will be picked up in the next amazing instalment of The Diviners. These are just a few of the questions I have: Who are the Shadow Men?, Who is the man in the stove-pipe hat? Will Sam find his mother in time? and What secrets are Will and Miss Walker hiding? I don’t know how I’m going to be able to wait for the next book. But I do know this, this is definitely a series I can’t live without!