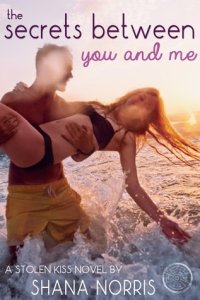 ‘Sometimes you have to get away to find what you really want.’ Loc 1751

Title: The Secrets Between You and Me
Author: Shana Norris
Publishd By: Vook, The Studio, A Paper Lantern Lit Imprint
Book: #2 of A Stolen Kiss
Genre: YA/NA, Romance
Found: Netgalley
Rating: 3 Voodoos

All Hannah wanted was a summer break from being “perfect Hannah Cohen” and a chance to forget about the devastating family secret that could ruin her seemingly perfect life. So when she takes off for her eccentric aunt’s house in the mountains of North Carolina and everyone makes one big (wrong) assumption about her past, Hannah figures that it’s easier to live a lie than have to face the truth.

She never expected to make any real friends, like the hilarious and spontaneous Kate and Ashton, who drag her to late night bonfires and ice cream marathons. And she especially never counted on meeting Jude Westmore, the brooding bad boy next door with gray eyes and permanent oil smudges on his fingers, or that he would ever take an interest in her.

Between moonlit movie nights in the bed of Jude’s truck and nearly romantic Ferris Wheel rides, Hannah’s old life seems father away then ever, but can she keep her secret, or is the truth worth the risk of losing everything, including Jude?

A ridiculously cute and fluffy young-adult romance which is perfect for a summer evenings read. It’s fast paced with a writing style that has an easy flowing feel and has a lovely coming of age message.

Hannah Cohen is trying to follow the advice of her life-couch and is on a mission to discover who she really is. But really she’s just running away from all the problems at home. With an alcoholic mother who demands perfection (because how you are perceived is more important than being happy, obviously) and a father who is in rehab for popping pills, it’s no wonder that Hannah would rather forget for one summer. While staying with her aunt, Hannah meets Jude who is a troubled and reserved young man. Their friendship could be the solutions to their happiness but will the secrets destroy everything they have?

Hannah wasn’t always the most likeable main character as she was quite selfish at times and constantly felt sorry for herself but she developed slowly giving this coming of age story real believability and in the end was a great character. I loved her aunt, especially when she started having a go at Hannah’s mum (her sister), I just love a protective relative.

‘How could anyone know who they really were with all of this outside pressure to be what others expected?’ Loc 889

Hannah’s mum was really really hate-able! She put so much pressure on Hannah to be something she wasn’t. Setting the standards so high that she couldn’t possibly meet them. I found it easy to imagine her as a real mother and it was sad to think that people do live with women like her. And when Hannah really needed her, she just collapsed in on herself and denied all responsibility. Hating her helped reinforce my feelings or sympathy and camaraderie with Hannah which are thing I find really important in a contemporary romance.

‘Some people don’t care about the image they project to the rest of the world. Aren’t you glad we know better? Loc 225

I only had a few problems character wise, and that was with Natalie and Jude. Natalie was nasty and spiteful during the story but at the end she seemed to just roll over and that was it. I know its nice to have all the ends tied up but it would have been more realistic to leave that friendship as a lost cause. Where as Jude was a little too perfect for me in the end, as he seemed to be the perfect gentlemen and put real effort into making sure that Hannah was happy however we were supposed to believe that he was a bad boy, who wasn’t on talking terms with anyone else in the town because of his misdemeanors, and his moodiness. It just didn’t seem to fit. It didn’t really matter in the end though because he was just so adorable and I fell in love with him.

The romance itself was so sweet and tender and was built up slowly – No insta-love here people! Even the angsty problems (which were inevitable – it is a YA Romance after all) had a good lead up to and didn’t feel forced or unnecessarily dramatic.

Overall this was a great story as it’s believable with real issues and real responses. If you are looking for something short and easy going, then I would definitely recommend it.

And I’m so excited to say that book #1 of Shana Norris’s A Stolen Kiss series is currently free to download from Amazon. I will definitely be purchasing that!