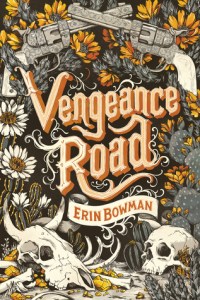 When Kate Thompson’s father is killed by the notorious Red Rose Gang for a mysterious journal that reveals the secret location of a gold mine, the eighteen-year-old disguises herself as a boy and takes to the gritty plains looking for answers and justice. What she finds are devious strangers, dust storms, and a pair of brothers who refuse to quit riding in her shadow. But as Kate gets closer to the secrets about her family, she gets closer to the truth about herself and must decide if there’s room for love in a heart so full of hate. In the spirit of True Grit, the cutthroat days of the Wild West come to life for a new generation.

I’ve never read a western story before, mainly because I have never seen a western film that I have been able to watch in its entirety. I usually get bored and walk off. But this… this was captivating! .

The story was similar to many fantasy novels that I love, with the girl dressing up as a boy to travel across the country unnoticed so she can avenge her families honour. It’s just taken out of the fantasy world and placed in a hot, sun-baked desert in Arizona, but I was happy to see a  head-strong main character. I’ve always admired a feisty female lead, so really, this was always going to be a winner with me. What made this different was the writing. The whole novel is written through Kate, with everything that she thinks and feels laid bare for us to see. I found Erin Bowman’s commitment to writing the whole thing in a specific cowboy-esque dialect, really admirable. It was a little hard to grasp at the beginning but I soon fell in love with it, especially as it gave the story such a unique and memorable voice.

Kate was a kick-ass main character, who’s anger spilled out of her on every page. I loved that she didn’t let things get in the way of her exacting her revenge, even when it meant she would have to do it alone. I can’t imagine anything more frightening! When she met up with Jesse and Will, you could tell straight away that there would be a reveal that she was a girl and that one or both of the boys would fall in love with her, but I didn’t care that it was predictable, because I was to busy enjoying the ride.

Jesse and Will were both funny and likeable, I loved the scene were they go for a bath in a pool and try to get Kate (or Nate as they thought she was) to join them. It reminded me of Mulan and The Swiss Family Robinson, films I loved when I was little.

I would have liked to see a bit more of the devastation caused by the Rose Riders because what we did get was shocking and imaginative. It was exciting! It fuelled my thirst for Kate’s revenge and really kept the story going at a good pace. (Perhaps I’m just too bloody-thirsty!)

I can’t believe how sucked in I was by this story, I felt Kate’s loss, her need for revenge, her desperation, the stab of betrayal (because there was lot of that) and the need for something to fill the void when it was all over. Morality went completely out the window with this one because I didn’t care who died, just as long as they paid for the pain they’d caused. I thoroughly enjoyed this novel and can’t wait to see what else Erin Bowman has to offer.