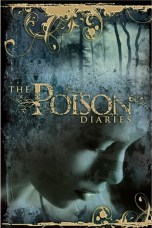 “Nature makes so many beautiful things. But I did not know until you that nature could make a girl so beautiful.”
- page 94

A dark, gothic tale of romance… and murder. In the right dose, everything is a poison. Jessamine has spent her whole life in a cottage close to her father’s apothecary garden, surrounded by medicinal plants and herbs that could kill her — although her father has never allowed her into the most dangerous part of the grounds… the poison garden. And so she’s never had reason to be afraid — until now. Because now a newcomer has come to live with the family, a quiet but strangely attractive orphan boy named Weed. Though Weed doesn’t say much in words, he has an instant talent for the apothecary’s trade, seeming to possess a close bond with the plants of the garden. Soon, he and Jessamine also share a close bond. But little does Jessamine know that passion can be just as poisonous as the deadliest plants in the garden — for behind Weed’s instinctive way in the garden is a terrible secret.

I’ve had this book some time, sitting prettily on my shelf. It such an interesting subject matter, but it ends only half way through the story and there’s a separation at the end which, unfortunately, I dislike hugely. To top it off I’ve heard things about book 3 which means I wont be reading the rest of the series.

My favourite character was Weed by far. He reminded me of Briar from the Circle series by Tamora Pierce and I love Briar so much, Weed was just lacking in Briars street smarts is all. I was sad at the life he’d had and how, just as things were looking up, it all fell apart again.

Had things not quite turned out the way they did, I think that my curiosity would have got the better of me, despite the separation, but seeing as Jessamine has a new friend (or so it seems) I don’t think she’s going to be the same girl we grew fond of in this book.

I would recommend this book for a younger audience, who don’t mind that it’s perhaps an unfinished series (I believe book 3 has a different author and is written differently).