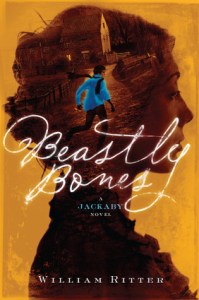 ‘Out of the question,’ I said, ‘We’ll find our clues with good old-fashioned, normal detective work.’
‘Ugh,’ Jackaby tossed back his head, ‘That sounds awful.’ Loc. 1294

The highly anticipated follow-up to the “rich world”* of the “lighthearted and assured debut,” featuring an “irresistible character” whose first thrilling and original adventure “demands sequels.”*

“I’ve found very little about private detective R. F. Jackaby to be standard in the time I’ve known him. Working as his assistant tends to call for a somewhat flexible relationship with reality.”

In 1892, New Fiddleham, New England, things are never quite what they seem, especially when Abigail Rook and her eccentric employer, R. F. Jackaby, are called upon to investigate the supernatural.

First, a vicious species of shape-shifters disguise themselves as a litter of kittens, and a day later, their owner is found murdered with a single mysterious puncture wound. Then in nearby Gad’s Valley, now home to the exiled New Fiddleham police detective Charlie Cane, dinosaur bones from a recent dig mysteriously go missing, and an unidentifiable beast starts attacking animals and people, leaving their mangled bodies behind. Charlie calls on Abigail for help, and soon Abigail and Jackaby are on the hunt for a thief, a monster, and a murderer.

This second installment of Jackaby was amazing and I enjoyed it so much more than Jackaby. Don’t get me wrong, I loved Jackaby but I found it very predictable and slightly too quirky at times, (to the point that it felt forced), but it’s completely not the case with Beastly Bones. I didn’t see anything coming! And the quirkiness of all the characters was charming and hilarious!

Beastly Bones continues straight on from Jackaby and follows Miss Abigail Rook and Detective Jackaby to the house of Mrs Beamount, who’s Cat seems to have sprouted scales and gills. I loved that Abigail is still very ordinary but has become a lot more confident with her handling of Jackaby because she doesn’t seem to let him call all the shots this time. After sorting the cat situation they go to a nearby dinosaur dig under the pretenses to help track a missing dinosaur fossil and find themselves on a hunt for a large creature that is decimating the small village.

William Ritter’s writing style is still beautifully crafted. It was great to see that the characters didn’t loose any of their charm when they left the dark Victorian city and found themselves in a back-town village in a dusty paleontology site. I was so happy to see that Charlie makes a reappearance in this book. I loved him in Jackaby and found the sweet little romance between him and Abigail, adorable. I was glad that it didn’t dominate the storyline, although it was nice to see it develop a little more and to get to know Charlie more too. The quick and witty banter between Miss Rook and Jackaby, that was so successful in Jackaby, has returned and again, had me laughing out loud. Jackaby’s eccentric personality still shone through even if there was slightly less of him, mainly to make room for numerous new characters, some of which were funny, like Hudson and Horner, and others that were slightly irritating, like Nellie and Mr Lamb. God, how Mr Lamb infuriated me! I don’t want to give too much away… so I really can’t say much more…

Overall this was a brilliant continuation, over too quickly perhaps but still totally worth the wait. I can’t wait to see what happens next, especially as we were left with the promise of the revelations of Jenny’s mysterious past and a creepy sickly pale villain that’s still at large. There are endless possibilities and I’m already excited at the prospects.