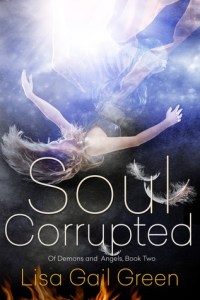 In Soul Corrupted, the sequel to Soul Crossed, life in Heaven isn’t all “happily ever after” for Josh and Grace. Now Guardian Angels, they are entrusted with finding and saving the next potential Antichrist. But Grace is consumed with worry about her family, which is dealing with the aftershocks of her death. She’s particularly concerned about her brother Noah, who has turned down a dangerous path of drugs and violence—and she’s frustrated by the rules of Heaven, which forbid her from contacting them.

Josh has troubles of his own. A former Demon, he questions his ability to guide troubled souls to the light. When he discovers that Noah made a deal with Lucifer and has even been hanging around with Josh’s old Demon pal, Keira, he makes a forbidden counter-deal with the Devil to save Noah’s soul. Josh’s side of the bargain? He has to sever his relationship with Grace.

Josh and Grace’s world is about to spin out of control, testing the limits of true love and blurring the border between Heaven and Hell.

Soul Corrupted is the second installment in Lisa Gail Green’s Of Demon and Angels series, which started with Soul Crossed.

I’m a big believer in giving a series a second chance. I had conflicting feelings about book one, Soul Crossed, mainly because I didn’t really like the ridiculously childish relationship between Grace and Josh. They seemed to spend the whole time running circles around each other and never getting anywhere. Grace was especially irritating, as she spent more time mooning than actually working and yet still, some how, managed to complete her job successfully. Fluke I say! But I did like the ending, it was clever, and I hoped that with the will-they-won’t-they-get-together aspect out of the way, there maybe a chance of this series catching my full attention. Anyway, if you would like to read my original review you can find it HERE.

Soul Crossed begins with Grace and Josh being set the task of discovering the next potential Antichrist and helping them find the right path, but Grace has found something else to moan about in this book! Her family! They are devastated by the loss of their perfect daughter and are falling apart. Grace’s brother Noah is making rash decisions and has turned into a BAD BOY. Worried that Noah could end up in Hell, Grace tries to persuade Mr Griffith’s (Head Angel/their tutor) to let her visit them and tell them she’s okay, but there are rules in heaven and Grace must never reveal herself to her family because the consequences could be catastrophic. Lucifer is angry that Josh and Grace managed to foil his plans in Soul Crossed and is looking for ultimate revenge (I.e. making them fall) so he hatches an evil plot that involves, blackmail, deceit and bargaining. Will he get what he wants?

I really tried to like Grace this time round but she’s just soooo whiny! She has no self confidence unless its in the making of terrible decisions and she can’t see that the world does not, in fact, revolve around her. She’s even managed to convince everyone else that it revolves around her too! If it wasn’t for Grace I think I would have really enjoyed this book, but sadly the story always seemed to come back round to her!

While I couldn’t get my head around Grace’s naive reasoning’s, I did understand Josh’s. He wanted to prove himself but didn’t believe he was good enough, so when he saw an opportunity to prove he could be selfless he jumped at it, that to me was cute, if stupid. Josh is likeable because of his level head. When he realised everything was going wrong he confessed everything, damn the repercussions. I admired him, especially as he had a violent upbringing, it must be hard to trust adults after that.

What I did love about this book was Noah (Grace’s brother) and Keira (the Demon from book 1). These two were broken and lost souls. I loved the romance between them and I loved finding out about Keira’s past, it was so sad. Keira helped prove that their is good in everyone, it’s just about having the confidence and will to do what’s right.

Soul Corrupted reads like a bridging book. It built up speed towards the end, setting the characters up for something huge, but didn’t actually deliver anything, leaving us on a cliff-hanger, waiting for the next book. Sadly, I’m not sure I will be joining them. Unless Grace undergoes a major transformation, and finally starts to see ‘the real world’ I don’t think I can go through another book with her moping and twisting everything to be about her. I can totally understand Noah’s feelings. It’s a shame because I really did enjoy reading everything else, but there are just some characters I just can’t stand and Grace is one of them.