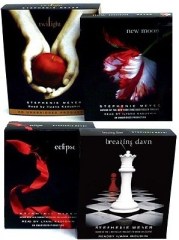 This is more of a reflection than a throwback review, but something made me re-evaluate my feelings on this series, it may be a little rant-like but here goes.

This is where I’d link you to my original reviews, but I don’t have any…

Twilight has received a lot of press and not many people are unaware of what it’s about, I’ll save you lengthy blurbs and just tell you that it’s about a girl who falls apart when her old and creepy and dead boyfriend leaves her.
Or is it?
I’m sure we’ve all seen those pins and meme’s where it compares Twilight to Harry Potter or The Hunger Games for example; 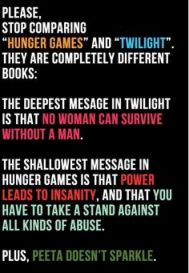 And for a while I laughed, rolled my eyes and moved on. I may have enjoyed the books (excluding 2 – I’ve been a vampire fan for 20 years and I am not a fan of Jacob and his weird brand of shapeshifter/werewolf/whatever) but with the release of the films I’d begun to dislike them more and more. But then something made me stop and think – how would I write a blurb for the Twilight saga? And I was surprised by the answer.

I realised that I’d say it was actually about a one hundred and something year old vampire who finally gets to meet the other half of his soul, despite being convinced he doesn’t deserve to be happy. It’s simply told from her point of view because the target audience is teen girls, not decades old male vampires.
Perhaps I took more notice of the whole mate/imprinting thing because I’m a BIG fan of L.J.Smith’s The Nightworld Series which has a soulmate principle in it (which I LOVED) But it was obvious that this is what Bella and Edward were supposed to be to each other and therefore any so called irrational behaviour made sense to me.

Perhaps this is because when I read it a conversation between Edward and Carlisle stood out for me.  Carlisle is telling Edward that perhaps Bella seems like she was made for him because she WAS, because despite how much Edward hates himself and what he is, someone somewhere has decided he deserves to have someone to spend the rest of his life with who will make him happy. (I’m paraphrasing, but that’s pretty much Carlisle’s meaning) There is also indication and mentions about Bella being born to become a vampire as well and it all just seems to fit quite nicely.

So I’m sorry, I think I’ll have to argue with the above pin. The deepest message from Twilight is that no matter how much you hate yourself, you are worth loving and you deserve to be happy. (Oh, and family will always be there for you, whether it’s family you’re born into or family you choose.) Besides, lets not forget who actually saved the day here. And she wasn’t any sparkly man! Though, she was sparkly herself…

I have to apologise, Twilight Saga, for letting the world influence how I feel about you. Perhaps one day I’ll give you a second chance and I can remember what it actually is you’re all about.

And in case you’re wondering…I’m team Jasper. (As in, he’s the best character, not that I want him hooking up with Bella. Yeeesh!)