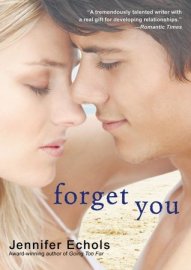 “Brandon is your boyfriend, right. You keep saying ‘Brandon is my boyfriend,’” he moved his fingers in quote marks, “and it makes as much sense as ‘I am balancing the planet Pluto on my big toe’ or ‘Kumquats make the best nuclear physicists.”

This is my A Book Recommended By A Friend choice for the 2015 Reading Challenge.

Why can’t you choose what you forget … and what you remember?

There’s a lot Zoey would like to forget. Like how her father has knocked up his twenty-four-year old girlfriend. Like Zoey’s fear that the whole town will find out about her mom’s nervous breakdown. Like darkly handsome bad boy Doug taunting her at school. Feeling like her life is about to become a complete mess, Zoey fights back the only way she knows how, using her famous attention to detail to make sure she’s the perfect daughter, the perfect student, and the perfect girlfriend to ultra-popular football player Brandon.  But then Zoey is in a car crash, and the next day there’s one thing she can’t remember at all–the entire night before. Did she go parking with Brandon, like she planned? And if so, why does it seem like Brandon is avoiding her? And why is Doug–of all people– suddenly acting as if something significant happened between the two of them? Zoey dimly remembers Doug pulling her from the wreck, but he keeps referring to what happened that night as if it was more, and it terrifies Zoey to admit how much is a blank to her. Controlled, meticulous Zoey is quickly losing her grip on the all-important details of her life–a life that seems strangely empty of Brandon, and strangely full of Doug.

I just want to start by saying I did enjoy this book as most of the romance was really cute and fluffy and sexually charged, plus the book itself was easy to read. I sat down on Saturday afternoon and by Sunday I’d finished it but I can’t give it more than three stars and I will try to explain why.

It annoyed me that the characters in this book couldn’t distinguish between sex and love and that sex doesn’t always mean you are in a relationship. This seemed such a naive and annoying thing. Zoey, in an emotion moment slept with her guy friend Brandon, who even she deemed ‘shallow’ and ‘a player’ and yet somehow she jumped to the conclusion that after sleeping with him and him walking off that they were ‘a couple’. If anything this was a one night stand but everyone else seemed to consider him her new ‘boyfriend’ too. This was just confusing to me. And even though she hadn’t seen him or talked to him for a week and a half afterwards she still referred to him as ‘her boyfriend’ and almost said they were in L… which would have been really ridiculous!

Talking of the LOVE word, the stupidity of Zoey and Doug having used that word to each other within Zoey’s 12 missing hours was just too much for me! One minute they hate each other and then they were in love??? I get that they are young but even naive puppy love doesn’t cover this…

I couldn’t always follow Zoey’s train of thought, like why she went to measure skid marks to figure out what had happened. Why didn’t she just look for a police report then? Or just ask someone? She could have asked what side of the road did the deer come out off? Or sooo I swerved right?

Another part of the story that seemed ridiculous was her mum pulling her out of the pool when she was mid swim (under the water!)… surely she must have super human reflexes cos that must have been like grabbing a fish out of a pond!

You must be wondering how there is anything left for me to like! Well there was, thankfully! I liked Doug, he was so sweet, and understanding even though there was no reason for him to be. I liked Zoey’s friends and family dynamics. I agree with the many reviews that said Zoey’s Dad was very one-dimensional but I didn’t mind that because it meant I could understand her need for him not to realise she had amnesia. He was loathsome and unreasonable, and Zoey’s right to think he’s likely to cheat on his new family because he seems like a ‘grass is greener’ greedy scum-bag! And I can understand why her two friends felt so stupid when they found out she had been keeping secrets, even if they could have handled it WAAYYY better.

Doug and Zoey did have a really cute connection and I liked reading about how her feelings were all muddled, and yet seeing them grow anyway. I just wish she’d just stopped with the ‘Brandon’s my boyfriend’ routine… he really wasn’t, you’re deluded!

Overall I suppose it was a little bit of a muddled mess, but it was also cute and fun and didn’t take me long to read. I’d like to read another of Jennifer Echols’ books as I did enjoy this, even if it didn’t all make sense.