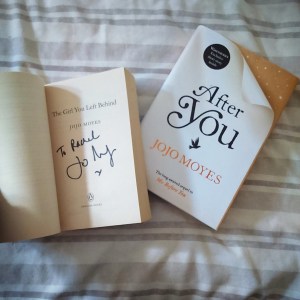 On Thursday, the 24th of September, Paein and I were privileged to attend the Waterstones Piccadilly Launch Event for
After You by Jojo Moyes.
Jojo Moyes was interviewed by Sam Baker from The Pool and we were given the opportunity to ask questions and talk with Jojo Moyes.
(An edited version of part of the evening can be found HERE) 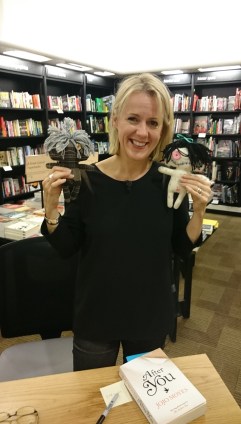 So who is Jojo Moyes…

Jojo Moyes is a British romance writer, who prefers the term ‘Fiction’ writer to ‘Women’s Fiction’. (It’s certainly NOT ‘Chick-Lit’!!). Her novel Me Before You has become a global phenomenon, selling over five million copies and hitting the Top Ten chart in numerous countries. Me Before You touched the hearts of so many people. It explored life and death and how important personal choice is. In early 2014 it was announced that Thea Sharrock would be directing the film, and we all squealed with excitement as the cast was slowly announced in the following months. Now, with an all star line up including Sam Claflin, Emilia Clarke, Jenna Coleman and Matt Lewis, we literally can not wait to see this wonderfully moving story translated onto the screen! We only have to wait till June 2016!

I’ll admit I was really surprised when After You was announced because I didn’t except it. How on earth do you follow something that tore out my heart and stomped on it? Well by the sounds of things with something grittier and sexier, that’s how! After You is apparently darker than it’s predecessor including revenge porn, drugs and the expected grief and recovery process but don’t panic we have been reassured that it’s still full of Jojo Moyes’ wonderful and very British sense of humour. Jojo Moyes also informed us that when it came to writing the sex scenes, she was a little apprehensive, as they can either be really good or really awkward to read. We can’t wait to read this for ourselves! 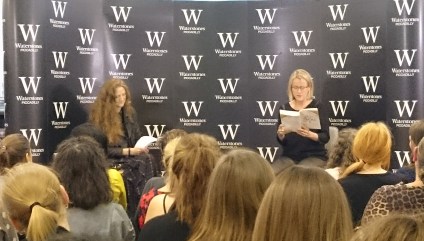 It was great to hear Jojo Moyes read an excerpt from her new book After You.

Fun facts we found out about Jojo Moyes:

1. She likes to run scenes through her head like a film to make them as realistic as possible. I’ve always found Jojo Moyes’ books to be easy to image and thinking about it now, it probably is because she writes in a cinematic way. Apparently it was this technique that made it easier for her to write the first draft of the screen play of Me Before You (which she promises is true to the book!)

2. She found it easy to identify with Lu and Lily in After You and this was important for her, as it helped her create believable characters. Her favourite character is still Lu though, because of her ‘lack of guile and snark’. I agree, she is such a genuinely nice character.

3. She’s an Unembarrassed Feminist. She likes writing women as ‘women that do, rather than women that consume.’

4. She likes words like IRIDESCENT and OSMOSIS (which are both used on the same page in Me Before You)

5. Yes, she cries when she writes sad moments in her books. It’s her way of knowing that she’s written something successful.

6. She has considering the possibility of there being a 3rd book in the Me Before You series, but only if she can see a storyline that deserves telling. And it definitely won’t be any time soon.

7. She always knew the end of Me Before You but it didn’t stop her from thinking about a Happily Ever After one, and she even rang her agent and asked if she could write two endings and let the readers decide. Her agent told her something along the lines of ‘Grow a Pair and get on with it’. And we’re very glad she did. She also mentioned that she considered writing Lou and Will a private HEA just for herself.

Having only JUST finished Me Before You ( yesterday actually, and after the event no less) I’m still all over the place about this. I’m annoyed at Lou for what she’s lost and I miss Will. (My review published this morning and can be found here) I will certainly wait to read After You, because ANY new characters will suffer from Not-Will syndrome…

I rather enjoyed Jojo Moyes’ responses to the questions thrown at her and look forward to finding my self in her worlds some more. Next on my list is One Plus One. Though having said all that, I’ve just ended up reading chapter two of After You on The Pool’s Bedtime bookclub page about it, because they’ve got an exclusive preview at the first 5 chapters. (I was looking for the video link!)

I am so excited to return to Lou’s story. After I finished Me Before You, I found myself, on numerous occasions, wondering what Lou would be up to now. It will be interesting to see if Jojo Moyes’ story is anywhere close to what I imagined.

It’s not a secret that I am a massive fan of Jojo Moyes. I’ve been collecting her books ever since I read Ship of Brides in 2008. Most of my books are currently making their rounds round my friends and family because I can’t help recommending them to literally anyone and everyone, mainly because I find her narratives so beautiful and so moving. My favourite so far (excluding Me Before You, obviously) is The Girl You Left Behind. I was so happy that I was able to get my copy signed along with my newly acquired copy of After You. I can’t believe I’ve finally met one of my favourite authors, I was completely star struck! She is such a nice person! 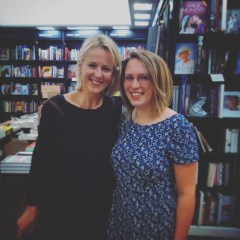 We would like to thank Waterstones Piccadilly for hosting this event and making it possible for us to meet the AMAZING Jojo Moyes. This is our second Book Launch Event hosted by this branch and we would recommend attending their events because the staff are attentive and everything is always very well organized.