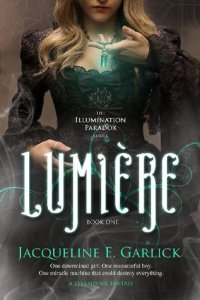 Thank you to Netgalley, the publisher and the author for giving me the chance to read this book in exchange for an honest review!
Published: 15th September 2015

’There are two things you don’t want to be found guilty of in this post-flash modern world. The first is Wickedry – the practice of magic, black or otherwise. And the second is Madness.’ Loc 243

One determined girl. One resourceful boy. One miracle machine that could destroy everything.

After an unexplained flash shatters her world, seventeen-year-old Eyelet Elsworth sets out to find the Illuminator, her father’s prized invention. With it, she hopes to cure herself of her debilitating seizures before Professor Smrt—her father’s arch nemesis—discovers her secret and locks her away in an asylum.

Pursued by Smrt, Eyelet locates the Illuminator only to see it whisked away. She follows the thief into the world of the unknown, compelled not only by her quest but by the allure of the stranger—Urlick Babbit—who harbors secrets of his own.

Together, they endure deadly Vapours and criminal-infested woods in pursuit of the same prize, only to discover the miracle machine they hoped would solve their problems may in fact be their biggest problem of all.

I haven’t read a lot from the steam punk genre but this is easily the best one I’ve read so far. It was action packed, full of likeable characters and so many clever and imaginative inventions! It was intriguing and kept me on the edge of my seat right up to the very end!

The story is told from two points of view and in first person, which at the beginning, I was a little apprehensive about because this can lead to confusion when it jumps from one character to another, but this wasn’t the case with Lumiere. Most of the chapters were from Eyelet’s point of view and the few chapters that were from Urlick’s POV had a different tone to them, setting them apart.

I really loved Eyelet as a main character. She wasn’t perfect by any means but she was strong and determined which is what I like to see in a heroine. She never let anything drag her down but took every challenge thrown at her with a will-fullness that was admirable. It took me a while to warm up to Urlick. He isn’t the conventional love-interest/hero as he has albino red eyes and raspberry birthmarks that cover his pale white face, but he also had shocking black hair! He was short tempered and didn’t seem happy sharing secrets. I loved the banter between Eyelet and Urlick, specially when they first meet and didn’t trust each other.

The world building was amazing. It blended a scientific Victorian style with a magical pagan style. Lumiere is set at a time when science is pushing forward and creating life changing machinery but at a time when witch ‘dipping’ is also happening because people are afraid of natural things that can’t be explained even though the biggest catastrophe to hit them was actually caused by a radiation machine (created by scientists) that pushed the world into constant darkness due to heavy cloud cover that blocks out the sun. The world is now an unsafe place, full of chemical mists that if inhaled cause death or, if unlucky, a zombie like state where you hunt and eat the living! Fear is rife, and any sign of madness sentences you to death (to protect the innocent of course)! Unfortunately with no understanding of mental or physical illness, many vulnerable people are also sentenced to death. Lets just say that this novel was full of quite gorey scenes and it was fantastic!

My only issue was that at some points there was just too much going on, and it became hard to follow. The first part espcially, I found hard to keep track of what was going on, as it just jumped straight in! We hardly knew anything about Eyelet or the world and yet, we were straight away, thrown into a situation and Eyelet was fleeing for her life. It seemed as though information was having to be forced in to some how explain why this was happening. And quirky details were thrown in, confusing the matter even more! It was just a bit jumbled and messy and kind of put me off a bit.

It was only in Part 2, when she meets Urlick and the others that the pace was found and my love for the characters was able to take hold. I really enjoyed the part within the compound. I would have liked to know more about the villian, Smrt. He was a horrible horrible character but I don’t think we were given enough of him prior to events to really make you fear him. He just seemed to pop up out of no where.

We were left on a cliff-hanger ending so I’m really glad I have book 2 at the ready. This was a promising start to a series and I can’t wait to read more!