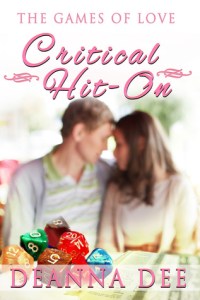 Molly Moreau used to be a geek with the best of them—role playing games, multi-user dungeons, trading cards—the works. Then she found her long-time boyfriend in a dark corner with a girl dressed as Lara “boobs and guns” Croft. That was it for the relationship and for her geekiness. After moving back home, she got a job at a normal bar and grill with normal people to live a normal life. That is until Craig shows up with his RPG character sheet.

Craig Lawrence has been rolling 1s on the relationship front ever since his last girlfriend broke up with him because he apparently spent too much time playing guardian to his rebellious little sister. When he meets Molly, he wants more than anything to win her heart, and this time he’ll do anything to keep his family problems from interfering.

When fate (Molly’s best friend) brings Craig and Molly together (sets them up on a date), will this relationship roll yet another 1? Or will it score a critical hit?

This was a really cute and funny YA romance. It was jam-packed with geeky stuff, such as Star-Trek (love the references – I’m a big fan) and a lot of gaming, including Marshalls and Magic (a D&D sort of game) and Chanters (which i presume is a card game with similar rules to pokemon?). I don’t know much about role playing games but there was enough description to give you a fair idea of the rules. I loved getting to know the characters as they got their geek on. Parker especially, was hilarious. He was so geeky that even the geeks found him a little embarrassing. I think everyone has a friend like that, but it was nice to see them accept him even at his cringiest moments.

In amongst the gaming there is a romance. It follows a simple idea. Molly was hurt by her previous boyfriend and now doesn’t trust any geek. That is until she meets Craig, who slowly gains her trust and brings Molly back into the gaming community. Their relationship grew slowly, which was nice because it didn’t feel fake or forced in anyway. The only thing that I did find a little irritating was her over-reactions to everything. I get that she was hurt previously, but every little thing was blown out of proportion. It made more sense when Ward turned up, at least then, she had a reason to flip out.

‘I’m overanaylzing this. Guys don’t work like girls.” Loc 1535
EXACTLY SO STOP IT!

I enjoyed Craig’s family situation. It was sad how he was taking responsibility for his sister because his parents were too drunk to care. However the way this situation was resolved seemed like a cope out to me. I wanted there to be shouting and a huge epiphany moment! But it just kind of sizzled out.

As a whole, I liked the balance between the gaming descriptions and the romance. It was short and sweet with plenty of geeky references to make me giggle. I would like to see where this story goes next. I’m hoping for more movie references as I’m more a movie geek than a gaming geek, but still, I enjoyed this story.