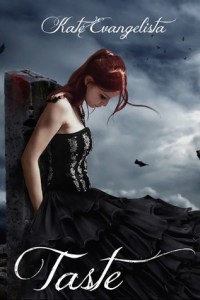 At Barinkoff Academy, there’s only one rule: no students on campus after curfew. Phoenix McKay soon finds out why when she is left behind at sunset. A group calling themselves night students threaten to taste her flesh until she is saved by a mysterious, alluring boy. With his pale skin, dark eyes, and mesmerizing voice, Demitri is both irresistible and impenetrable. He warns her to stay away from his dangerous world of flesh eaters. Unfortunately, the gorgeous and playful Luka has other plans. When Phoenix is caught between her physical and her emotional attraction, she becomes the keeper of a deadly secret that will rock the foundations of an ancient civilization living beneath Barinkoff Academy. Phoenix doesn’t realize until it is too late that the closer she gets to both Demitri and Luka the more she is plunging them all into a centuries old feud.

Kate Evangelista was the first author that I talked to thanks to Goodreads. I was a little scared to start with because authors are like celebrities to me, whether they are well known or not. Anyone who can sit down and put their heart on a piece of paper and give it to the world, well they deserve respect if you ask me! But yes, Kate Evangelista was very nice and offered me a copy of this book.

Barinkoff Academy is a school for wealthy, but highly intelligent, children. There is only one rule, NO students on campus AFTER curfew. When Phoenix McKay falls asleep in the library during her last period she doesn’t expect to wake up to find its after curfew and the school is full of the most beautiful people dressed in strange outfits. But these beautiful people look at her strangely, and keep saying how they wish to ‘Taste her flesh’.

I was drawn to this book initially, because I was curious as to what the Flesh eaters were. I had already picked up from the few reviews I’d read that they weren’t Vampires, and I thought why not. Sounds fun, I’ve read so many books like this (I was thinking along the lines of Vampire Diaries or Night School) that it’ll be predictable and easy to read.

But I was pleasantly surprised. I was introduced to a world of the Zhamvy, “The mythological equivalent of a zombie.” Ahhh of course, as Demetri jokes, what else was I expecting “A vampire perhaps? Or a werewolf maybe? I hear they are popular these days.” Haha. Yes I was happy to find that Kate had put so much thought and time in to developing a new and interesting angle on Zombies, (a paranormal idea that has been slowly swamping our bookshelves recently). I was also happy to see that there was so much rich background development that you could understand what they were and how they lived.

I found Phoenix McKay an interesting main character, I liked that she was very willful and a typical teen in the fact she would push boundaries and question everything! Such a refreshing thing to encounter,  as I find so many YA books try to draw out the readers interest by withholding information. Not in this case, Phoenix would push and pick and investigate to get the answers. YAY! I did find her to be a little temperamental at times though, especially around Demetri, she would have massive mood swings!

There was a good selection of man-candy to appreciate

There was Demetri, the beautiful dark haired prince, dark and broody and betrothed to another… so off-limits??? Of course not! LOVE IT! There was Drey, the nerd scientist who with a sweet and nervous disposition was very persuasive in getting Phoenix to help in his experimentation’s to save the Zhamvy from imminent extinction. And then there was Luka, oh LUKA! How I wish I could hug you! The fair haired, quiet but determined beast of a man, with the gentle touch, I wish I could hate Demetri so you could have the ending you deserve!

Kate Evangelista injects a witty and humorous edge to her writing, which, although not perfect, makes Taste a very entertaining story to read. I finished it in a couple of days, during which I couldn’t stop thinking about what may happen next.

While I loved most of this book there was some unanswered questions at the very end that left me a little… wanting… for a better word. I have seen that there is a second book so perhaps there is where the answers lie. But for now, Taste sits in a very happy and well deserved 4* place.

I have read quite a few of Kate Evangelista’s books now and think she is definitely one of those gems that I only found thanks to Goodreads.