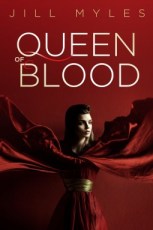 Thank you to netgalley and the publishers for giving me the opportunity to read this book for an honest review.
Published: 30th June 2015

For one hundred years, Seri’s people have lived under the thumb of the Blood, the cruel and mysterious rulers of Athon. Seri wants nothing more than to put food on the table and marry the hotheaded but handsome Rilen come spring. But when a noblewoman asks Seri to be her handmaiden, Rilen insists she move to the enemy’s castle . . . and spy on the newly arrived prince.
After a century, Prince Graeme has grown weary of his family’s curse. The Blood are powerful, but doomed to live in the shadows, flitting from lover to lover, always in search of the mythic Eterna—the one woman who will sate their hunger. Now his father has sent him to the outskirts of the empire to stamp out a rebellious Vidari faction. But when a wild and alluring Vidari girl shows up at court, he finds himself torn between following his father’s orders and following his heart . . .
A war is brewing between Athonite and Vidari, between Blood and man. As uprisings sweep through the land, Seri and Graeme find themselves at the centre of a storm with only one choice: betray each other, or betray their people.

This is a new edition of the previously self-published novel Betrothed.

This seems to be a stand alone book, but I do hope it’s not. While it’s all wrapped up neatly, there’s so much more of this world we didn’t get to explore. Especially what will happen with all of them next! It’s been semi-labeled as a Beauty and the Beast retelling, and while I can see why, I can’t pick apart the comparison without giving away too much of the plot.

I loved the ending, the meeting of the two and I hope it goes well for them, as to the future, for the other Blood as well as their future children, well, I guess we’ll have to wait and see if more stories appear. I have no idea what they’d be about, but there’s a whole world here that needs more exploration.

This is possibly one of the only stories I can recall, where a lack of communication has a clear reason and explanation. And while it’s annoying, it didn’t drag on too long and get annoying which was superb. There was also the whole love triangle thing, but that wasn’t so bad either. I knew Rilen would loose out to Graeme in the end (it’s that kind of story) so I wasn’t fussed. I have to say that I rather liked Graeme as a character, but that I loathed Rilen immensely. That he broke his promise wasn’t a surprise, I was actually expecting it.

I was surprised I liked this book so much and it wasn’t until Ms4Tune had read the book that I requested it from Netgalley, (her review can be found HERE) Having read books by Jill Myles before and not liking them so much I was initially put off reading this one too but I’m glad I changed my mind. I’d recommend this book to people who are trying to decide if they like her books or not because it’s different and interesting and worth the read.