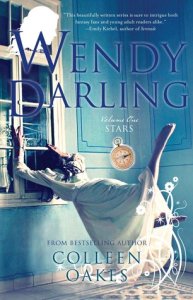 Thank you to Netgalley and the Publisher for giving me a chance to read this book in exchange for an honest review.
Publish date: 13th October 2015

Wendy Darling has a perfectly agreeable life with her parents and brothers in wealthy London, as well as a budding romance with Booth, the neighborhood bookseller’s son. But while their parents are at a ball, the charmingly beautiful Peter Pan comes to the Darling children’s nursery and—dazzled by this flying boy with god-like powers—they follow him out of the window and straight on to morning, to Neverland, a intoxicating island of feral freedom.

As time passes in Neverland, Wendy realizes that this Lost Boy’s paradise of turquoise seas, mermaids, and pirates holds terrible secrets rooted in blood and greed. As Peter’s grasp on her heart tightens, she struggles to remember where she came from—and begins to suspect that this island of dreams, and the boy who desires her—have the potential to transform into an everlasting nightmare.

Wendy Darling is a darker and more violent retelling of Peter Pan and I’m not completely sure how that makes me feel. It was a clever concept that was exciting and intriguing but it also made me feel very uncomfortable. There are some very adult topics touched on in this book, that I wasn’t aware of when I started this and I think this was partly the reason that I possibly didn’t connect with this story in the way I would have liked.

Wendy, John and Michael Darling live in London with their mother and father. They are a family of wealth in a time when social standing was everything. But Wendy has fallen for a boy named Booth, and Booth is the son of a Book Shop Owner… their union would be disastrous for the Darling family and her father will do anything to stop her from ‘walking out’ with him. Wendy is devastated and whilst her parents are at a ball and her brother John taunts her over her misfortune, Wendy considers running away to see Booth. It is at this moment that Peter Pan smashes his way into their nursery and bewitches them with promises of adventures, pirates and flying!

It took quite a while for me to get through this first part of the story, it was a little slow and, I’m sad to say, boring. I wanted to fall in love with Booth but I found him to be pushy and whiny. I wanted Wendy to be stronger, I know she’s supposed to be a ‘good girl’ but I still imaged her to be willful and a fantasist. Instead, Wendy came across as frightened of everything, a bit of a push over and completely without direction. And it’s only towards the end of the novel that she starts to show some kind of sparkle.

I hated John with a passion. My brother and I have always had our differences and of course we fight, what siblings don’t, but we always have each others backs. John seemed to have no loyalties at all! He cared only for himself, and was a complete arse! His only redeeming quality was the small gestures of love he shows towards Michael, but these are few and far between.  I didn’t really like this discord in the family. I always liked that the Darling children had a strong bond and I missed it in this retelling.

When they arrived in Neverland, everything changed! The descriptions of Neverland were beautiful! I could clearly imagine every little thing, from Shadow Mountain to Pan’s Island to ‘Booty Bay’. It was hard not to fall under the magical spell of Neverland! Even though danger seemed to lurk round every corner! (Appearing in the form of killer Mermaids and a maniac fairy with serious control issues!) It was edgy and exciting and I really did enjoy this part of the book. I can tell you the exact moment I felt a special connection with the characters and that was at the first meal in Neverland and when they all sat in the teepee for storytime. This was a perfect moment!

I enjoyed getting to know the random members of the Lost Boys and Pips (those to young to be Lost Boys) but I always had an odd feeling, and this is mainly down to Peter. He was very touchy feely and always staring at Wendy. His attention felt sleezy, almost like he was a groomer I suppose. He was always flattering her, and trying to make her feel special and his behaviour seemed to bring out strange jealousies in the Lost Boys, most of them were horrible towards Wendy. As the story continued Peter’s behaviour got worse and worse. He became very controlling and at one point tries to force Wendy into a situation. This made me feel really uncomfortable. This is a huge step away from the original, let alone the Disney version, I can tell you that!

Peter enlists John to organise a Raid of Hooks alcohol. This was the part of the book that held the most excitement but also the most deaths. People were dying all over the place, but it was still entertaining and clever. Wendy slowly starts to realise that Peter isn’t as nice as he makes out to be and starts to doubt his motives. It’s after this that Peter starts to be more scary than interesting and I can’t blame Wendy for trying to get away.

I think, in the end, because I thought this was going to be closer to the original I was a little put out and didn’t enjoy this as much as I thought I would, but I would say it was worth reading for the descriptions of Neverland alone. I would recommend this to someone if they wanted a more adult, more sinister approach to Peter Pan. I think once I have had more time to process what I just read I will probably read book 2. One things for sure, I really enjoyed Colleen Oakes’ writing style and I’m very interested in reading another of her works.