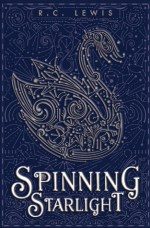 “The Khua’s power, I still feel it, but it’s no longer a sleeping giant waiting to crush me on a whim. It’s a power bound, a being in trouble, crying for help. Like it’s too large to help itself. With a silent hope that I’m small enough, I raise my hand to the mote of light.”
- page 245

Sixteen-year-old heiress and paparazzi darling Liddi Jantzen hates the spotlight. But as the only daughter in the most powerful tech family in the galaxy, it’s hard to escape it. So when a group of men show up at her house uninvited, she assumes it’s just the usual media-grubs. That is, until shots are fired.
Liddi escapes, only to be pulled into an interplanetary conspiracy more complex than she ever could have imagined. Her older brothers have been caught as well, trapped in the conduits between the planets. And when their captor implants a device in Liddi’s vocal cords to monitor her speech, their lives are in her hands: One word and her brothers are dead.
Desperate to save her family from a desolate future, Liddi travels to another world, where she meets the one person who might have the skills to help her bring her eight brothers home-a handsome dignitary named Tiav. But without her voice, Liddi must use every bit of her strength and wit to convince Tiav that her mission is true. With the tenuous balance of the planets deeply intertwined with her brothers’ survival, just how much is Liddi willing to sacrifice to bring them back?
Haunting and mesmerizing, this retelling of Hans Christian Andersen’sThe Wild Swans strings the heart of the classic with a stunning, imaginative world as a star-crossed family fights for survival in this companion to Stitching Snow.

For some reason the title makes me think this should be a Sleeping Beauty not a The Wild Swans tale. It might just be the ‘spinning’ though. Spinning wheel? No? Ok then…

Liddi has 8 brothers and I found it very hard to keep track of who was who! But to be honest it wasn’t that important. And while the end was sad, it was more through her reaction than anything else. But it did make me cry.

I had a few issues with things in the storyline, which were mostly explained away so that’s fine. Except, why wasn’t she going about mouthing the words? Unless she tried that and, like my dad does, over pronounced and was miss-interpreted and accidentally ordered 5 thousand tooth picks or something. You can never tell.

I like these Sci-fi fairytales by R.C.Lewis, the romance is part of the story, but not a major part of the plot, it’s far more realistic. Obviously, again, these books will be compared to Marissa Meyer’s Lunar Chronicles, becaues they’re the only other sci-fi fairytales out there – that I know of/ haven’t forgotten about, if there are more please let me know immediately – and I wonder if that’s why she’s moved away from the more well known ones. BUT I want to see her take on them! Unless she’s a fan of The Lunar Chronicles of course, then maybe she’s too influenced by them now, like trying to review something after reading other peoples reviews…

But back to the book….I’d have liked to see more of Liddi’s brothers to be honest, to be able to have a favourite within them would have been amazing, because they seemed to be great characters. But I think Tiav is probably my favourite. He was quite grown up for how young he was too. His friend was a bit of an idiot however, but he did seem to grow out of it so that was good.

If you love fairytales and Sci-Fi, I’d recommend sci-fi fairytales. And even if you only like one of the genres, give them a go. They’re good!